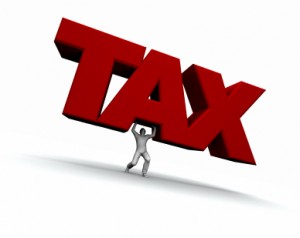 Washington may be a tax reform wasteland, but out in the states the action is hot and heavy. Nine states—including such fast-growing places as Florida, Tennessee and Texas—currently have no income tax, and the race is on to see which will be the tenth, and perhaps the 11th and 12th.

Oklahoma and Kansas have lowered their income-tax rates in the last two years with an aim toward eliminating the tax altogether. North Carolina’s newly elected Republican Governor Pat McCrory has prioritized tax reform this year and wants to reduce the income tax. Ditto for another newcomer, Mike Pence of Indiana, who has called for a 10% income-tax rate cut. Susana Martinez, New Mexico’s Republican Governor, has called for slashing the state corporate tax to 4.9% from 7.6%, and the first Republican-controlled legislature since Reconstruction in Arkansas is considering chopping its tax rates by as much as half.

But those are warm-up acts compared to Nebraska Governor Dave Heineman’s announcement this month that he wants to eliminate the state income tax and replace it with a broader sales tax. “How many of you have sons and daughters, grandchildren, brothers and sisters and other family members who no longer live in Nebraska because they couldn’t find a job here or they couldn’t find the right career here in Nebraska?” he asked. He believes eliminating the income tax—with a top rate of 6.84%—will make the Cornhusker State a new magnet for jobs.

Then there’s Louisiana Governor Bobby Jindal, who wants to zero out his state’s income tax (top rate 6%) and the 8% corporate tax and replace them by raising the state’s current 4% sales tax. He would also eliminate some 150 special interest exemptions from the sales tax, including massage parlors, art work and fishing boats.

As an economic matter, this swap makes sense. Income taxes generally do more economic harm because they are a direct penalty on saving, investment and labor that create new wealth. Sales taxes, by contrast, hit consumption, which is the result of that wealth creation. Governors Jindal, McCrory and Heineman cite the growing evidence that states with low or no income taxes have done better economically in recent decades compared to states with income-tax rates of 10% or more.

A new analysis by economist Art Laffer for the American Legislative Exchange Council finds that, from 2002 to 2012, 62% of the three million net new jobs in America were created in the nine states without an income tax, though these states account for only about 20% of the national population. The no-income tax states have had more stable revenue growth, while states like New York, New Jersey and California that depend on the top 1% of earners for nearly half of their income-tax revenue suffer wide and destabilizing swings in their tax collections.

In the case of North Carolina, a new study by the Civitas Institute concludes that a tax reform that shifts more of the burden to consumption from income would increase average annual personal income growth by 0.38% to 0.66%. That’s enormous over time and would lead to much higher state tax revenues. North Carolina’s top income tax rate is 7.75%, which is higher than that of most nearby states that it competes with for investment. Virginia’s top rate is 5.75% while Tennessee has no personal income tax.

The main challenge for these Governors will be making the political sale. Critics will call the income-for-sales-tax swap regressive because everyone pays it. Mr. Jindal is countering by exempting food, medicine and utilities from his sales tax and providing a rebate for low-income families so their tax bills would not rise. But Governors will have to trump the critics by stressing the larger economic benefits for the state.

States with big energy production, like Louisiana and Oklahoma, also have another reform option: replacing the income tax with revenues from oil and gas extraction taxes, drilling leases and royalty payments. This kind of reform makes everyone in the state a stakeholder in America’s energy renaissance from horizontal drilling and hydraulic fracturing. It also helps build a political constituency for more mining and drilling.

Governor John Kasich has proposed using revenues from oil and natural gas drilling to reduce Ohio’s income tax rate. He plans to introduce his own larger tax reform soon. North Dakota, which last year became the second largest oil producing state (after Texas), could easily afford to abolish its income tax, much like Alaska did in 1980. Many more states could collect billions of dollars in energy-related revenue if they and the feds allowed more drilling on state and federal lands and offshore.

This state reform trend is a rare bright spot in the current high-tax era, and it will further sharpen the contrast in economic policies between GOP reform Governors and the union-dominated high-tax models of California, Illinois, New York, Massachusetts and now Minnesota, where last week Governor Mark Dayton proposed a huge tax hike. Let the policy competition begin.