The Top 5 Lies About Fracking 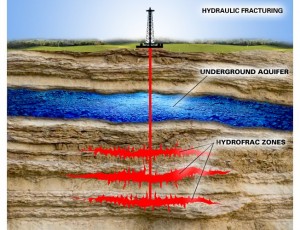 Gasland Part II, the sequel to director/activist Josh Fox’s earlier anti-fracking docudrama Gasland, will run on HBO. It appears to have rounded up the usual corporate villains and appealing victims of profit-hungry capitalist skullduggery, rather than telling the more substantial story: that fracking combined with horizontal drilling has unleashed a bonanza of cheap natural gas.

Fracking involves injecting pressurized water combined with sand and small amounts of chemicals to crack open shale rocks so that they will release trapped natural gas. Generally, the shale rocks are thousands of feet below the aquifers from which people draw drinking water. No doubt to the dismay of activists, President Barack Obama appears to endorse the process. “Sometimes there are disputes about natural gas,” he said at his climate change speech last week at Georgetown, “but let me say this: We should strengthen our position as the top natural gas producer because, in the medium term at least, it not only can provide safe, cheap power, but it can also help reduce our carbon emissions.”

The president gets it, but a lot of activists don’t. To help bring them around, I thought I’d take a look at some of the misleading claims made by opponents of fracking. Fortunately I just got a fundraising letter from fine folks at foodandwaterwatch (FWW) urging me to sign and send in a petition to the president to ban fracking. The letter is a nice compendium of anti-fracking scaremongering.

Falsehood 1:  You can light your tap water on fire. Fox made this claim famous in the first Gasland movie when he showed a resident of Colorado striking a match as water came out of his tap; the natural gas dissolved in the water burst into flame. Yet the water was tested by the Colorado Department of Natural Resources, which reported to the resident: “There are no indications of any oil & gas related impacts to your well water.” The agency concluded that the natural gas in his water supply was derived from natural sources—the water well penetrated several coal beds that had released the methane into the well.

The FWW letter warns, “When fracking loosens gas, it can cause methane to migrate into nearby household wells and drinking water.” It adds, “Your home could explode, like the house that blew up in Pennsylvania and killed three people.” This appears to be a reference to the 2004 case of Charles and Dorothy Harper and their grandson Baelee, in which natural gas migrated into their basement from some new nearby wells being drilled by the Snyder Brothers production company.

This artfully constructed section of the letter wants readers to conclude that fracking caused the deaths of the Harpers. Yet the wells in question were conventional gas wells; no fracking was taking place. The Harpers were killed by negligence: The company had not made sure that the casings on the wells were properly sealed with cement. (Cement is poured down around the well’s steel piping to prevent gas or fluids from traveling upward and coming in contact with exposed rock along the borehole, where it can leach into drinking water aquifers.) Fracking technology had nothing to do with the tragedy, for which the Snyder Brothers made court-ordered restitution to the Harper family.

Another house exploded—fortunately without significant injury—when natural gas seeped in from a well in Ohio in 2007. In this case, the Ohio Valley Energy Systems Corporation was fracking an old conventional well whose cement casing was inadequate to block new supplies of highly pressurized natural gas from migrating into nearby water wells. Once the company fixed the casing, the problem was solved.

As A. Scott Anderson, a senior policy adviser with the Environmental Defense Fund, told The Wall Street Journal last year, “The groundwater pollution incidents that have come to light to date have all been caused by well construction problems.” As the number of wells increase, so too will the chances that some will not be properly cemented, but that’s not a problem inherent to fracking. Meanwhile, it is worth noting that the vast majority of natural gas explosions do not involve wells at all.

Falsehood 2:  Fracking fluid “could seep into groundwater and poison drinking water.” (The underlining is the FWW’s.) The letter also asserts that fracking fluid is “full of poisonous chemicals.”

Of course, the cabinet underneath your kitchen sink is also likely to be “full of poisonous chemicals.” What matters to your health is the amount of exposure you have to them, not the mere fact of their existence.

A new study by researchers at Duke University, published in the Proceedings of the National Academy of Sciences in June, did find higher concentrations of methane in water wells that were within a kilometer of gas wells. But like earlier reports, the new paper concluded that the two simplest explanations for the higher levels of dissolved gas were faulty steel casings and improper cement sealing of the wells, not fracking. In addition, this study and two earlier ones done by the same team found no indication that well water has been contaminated by fracking fluids. (About 99.5 percent of fracking fluids, I should add, consist of water and sand.)

Is Pavillion, Wyoming, the exception? At the request of the remote community’s residents, the U.S. Environmental Protection Agency (EPA) investigated to see if their wells had been contaminated by fracking fluids. The agency’s draft report in December 2011 reported that water taken from sampling wells had found “synthetic chemicals, like glycols and alcohols consistent with gas production and hydraulic fracturing fluids.” But as the EPA turned over further investigation to the Wyoming Department of Environmental Quality, the federal agency noted that the source of these “constituents of concern” had “not been determined,” and that the EPA’s efforts to figure how the contaminants got into the water wells had been “inconclusive.”

The Wyoming investigators’ report is due next year. Needless to say, if a natural gas producer does contaminate someone’s water, the company must be held fully accountable for it.

Almost any industrial activity will involve the production of noxious fumes at least some of the time. So how does the air pollution associated with producing natural gas compare to other industrial processes? A 2013 report from RAND Corporation researchers, published in Environmental Research Letters, calculates the regional air quality damages from gas production in Pennsylvania. Their reckoning of total damages takes into account harms both to physical health and the environment, including mortality, morbidity, crop and timber loss, visibility, and effects on anthropogenic structures and natural ecosystems.

They conclude that air quality damages from all natural gas production in the state amounted to between $7.2 million and $32 million in 2011. By contrast, the four largest coal-fired electricity generation plants in the state were the sources of nearly $1.5 billion in damages in 2008. The whole natural gas industry is responsible for just 2 percent of Pennsylvania’s smog-causing volatile organic compounds, 5 percent of its nitrogen oxides, and 1 percent of the small particulates emitted by all industry in the state in 2008. (The RAND researchers could not get comparable 2011 data for the total air-pollution damage, so they used the closest year with available information.) That’s not nothing, but converting just one coal-fired plant to burn natural gas would do far more to improve Pennsylvania’s air quality than shutting down the state’s entire gas industry.

Falsehood 4:  Fracking causes cancer. The FWW letter hints at this, but the most incendiary claim along these lines was made by Josh Fox in his short “emergency film,” The Sky Is Pink (2012). Fox intones, “In Texas, as throughout the United States, cancer rates fell. Except in one place: in the Barnett Shale. The five counties where there was the most drilling saw a rise in breast cancer throughout the counties.”

The claim is entirely specious. Fox apparently based his lightly sourced assertion on a single newspaper article. Even that article garbled the data, reporting that six counties in the western Dallas-Fort Worth area have the highest rates of invasive breast cancer in Texas, rising all the way from 58.7 cases per 100,000 people in 2005 to about 60.7 per 100,000 in 2008. Typically breast cancer rates are reported as per 100,000 women, which would roughly double the rates cited in the article to 117.4 and 121.4. Meanwhile, the incidence of breast cancer among all Texas women hovered around 116 per 100,000 between 2005 and 2009. The U.S. rate was 125.7 per 100,000 women.

To fact-check Fox’s claims, the Associated Press turned to two Texas researchers, Simon Craddock Lee, a professor of medical anthropology at the University of Texas Southwestern Medical Center in Dallas, and David Risser, an epidemiologist with the Texas Cancer Registry. Both said that there was no evidence of an increase in breast cancer in the counties cited by Fox.

Falsehood 5:  Natural gas is worse than coal. This particular claim was launched in 2011 with a hastily cobbled-together study by three anti-fracking researchers at Cornell. Their argument is that leaking methane, whose global warming potential is much greater than that of carbon dioxide, more than entirely offsets whatever reductions in carbon dioxide emissions would be achieved by, for example, switching from coal to gas to generate electricity. The FWW letter claims that calling natural gas “clean” energy is “misleading,” but unlike the Cornell researchers the group concedes that burning natural gas “emits half as much carbon dioxide as coal.”

The FWW came much closer to the truth than the Cornell crew did. A comprehensive analysis published in November 2012 by researchers associated with the National Renewable Energy Laboratory found that “the life cycle greenhouse gas emissions associated with electricity generated from Barnett Shale gas extracted in 2009 were found to be very similar to conventional natural gas and less than half those of coal-fired electricity generation.” With respect to global warming, producing and burning natural gas from fracked wells is much better than burning coal.

Make no mistake: Any industrial process can go awry, usually through human error. And not everybody is a saint: Venal people will try short cuts that end up harming the innocent. When mistakes are made or short cuts taken, the culprits should be punished and the victims fully compensated for their losses.

But don’t assume those villains are the norm. Over 500,000 gas wells are currently operating in the United States. Most of them manage to avoid blowing up houses, poisoning drinking water, making it hard to breathe, causing cancer, or being worse than coal.

Ronald Bailey is the award-winning science correspondent for Reason magazine and Reason.com, where he writes a weekly science and technology column. This article appeared at Reason.com.