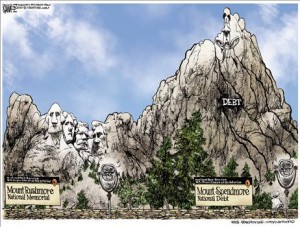 How big is the national debt?

You’d think this would be an easy question. Surely we know how much the government owes. Unfortunately, it’s not that simple. The true national debt could be triple the conventional estimate, anywhere from $11 trillion to $31 trillion by my reckoning. The differences mostly reflect explicit and implicit “off-budget” federal loan guarantees. In another economic downturn, these could result in large losses that would be brought “on budget” and worsen already huge deficits. That’s the danger.

My purpose is not to scare or sensationalize. It’s simply to illuminate the problem. Broadly conceived, the national debt covers all debts for which the federal government assumes final responsibility. For politicians, the appeal of “off-budget” programs is that they allow the pleasure of spending without the pain of taxing. But they also create massive exposure for government.

Let’s see why. Below are five estimates of the national debt. I compare each with our national income (gross domestic product), which is the economic base to service debts. In fiscal 2012, GDP was $15.5 trillion. Some economists say a debt ratio exceeding 90 percent slows economic growth. The United States already exceeds this threshold on four of my five measures.

(1) TREASURY DEBT HELD BY THE PUBLIC: $11.3 trillion, 73 percent of GDP for fiscal 2012. This is the most common measure of the national debt. Reflecting past annual deficits, it represents what must be borrowed through sales of Treasury bills, notes and bonds. In 2007, the figures were only $5 trillion and 36 percent of GDP. Today’s levels — as a share of GDP — are the highest since World War II’s immediate aftermath.

(3) FEDERAL LOANS AND LOAN GUARANTEES: $2.9 trillion in 2011, 19 percent of GDP. The government makes or guarantees loans to college students, farmers, veterans, small businesses and others. The face value of most of these loans don’t show up in the budget, but the government is on the hook if borrowers default. Adding this debt (19 percent of GDP) to gross federal debt produces a total debt ratio of 122 percent of GDP.

(4) FANNIE AND FREDDIE: $5.1 trillion, 33 percent of GDP. The government wasn’t legally required to cover the debts of these “government sponsored enterprises” — the major lenders to the housing market — but almost everyone assumed it would if they got in trouble. That happened in September 2008. With Fannie and Freddie, the total debt ratio rises to 155 percent of GDP.

(5) THE FEDERAL DEPOSIT INSURANCE CORPORATION: $7.3 trillion, 47 percent of GDP. That’s the insurance protection on bank accounts up to $250,000. Including the FDIC brings the total debt ratio grows to 202 percent of GDP.

So the most expansive measure of national debt ($31 trillion) is nearly three times the conventional estimate ($11 trillion). Almost all the items on my list — whether Treasury bonds or bank deposits — are ultimately legal obligations of the federal government. Note: They differ from Social Security and Medicare benefits, which are often called “debts.” They aren’t. Congress can alter the benefits anytime it chooses.

First, some federally backed credit programs confer huge benefits. The FDIC’s insurance prevented a depositors’ panic in the financial crisis. It also has a $25 billion insurance fund to cover payments. Second, most federally backed credit goes to private borrowers who should be able to repay. Lax credit standards may produce some defaults, but in normal times they should be a tiny fraction of the total. Usually, these programs aren’t a major drain on taxes. By contrast, borrowing to cover budget deficits is not automatically self-liquidating.

The rub is that we don’t live in “normal times,” as that term was used. Credit expanded on the upbeat belief that steady economic growth, marred only by modest recessions, would enable most debts to be serviced. The financial crisis and Great Recession demolished this permissive presumption. As the slump deepened, off-budget commitments became on-budget costs. Bank rescues swamped the FDIC’s resources; mortgage losses impelled the Fannie and Freddie takeovers.

Something similar could happen again. A deep downturn could cause a cascade of defaults on “off-budget” guarantees that require on-budget bailouts. The lesson: We should reject new off-budget commitments and curb some that already exist.

Robert Jacob Samuelson, a columnist for The Washington Post, writtes about business and economic issues.