“All the political angst and moral melodrama about getting ‘the rich’ to pay ‘their fair share’ is part of a big charade. This is not about economics, it is about politics. Taxing ‘the rich’ will produce a drop in the bucket when compared to the staggering and unprecedented deficits of the Obama administration.” 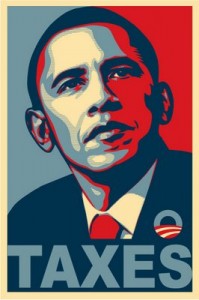 Amid all the political and media hoopla about the “fiscal cliff” crisis, there are a few facts that are worth noting.

First of all, despite all the melodrama about raising taxes on “the rich,” even if that is done it will scarcely make a dent in the government’s financial problems. Raising the tax rates on everybody in the top two percent will not get enough additional tax revenue to run the government for ten days.

And what will the government do to pay for the other 355 days in the year?

All the political angst and moral melodrama about getting “the rich” to pay “their fair share” is part of a big charade. This is not about economics, it is about politics. Taxing “the rich” will produce a drop in the bucket when compared to the staggering and unprecedented deficits of the Obama administration.

No previous administration in the entire history of the nation ever finished the year with a trillion dollar deficit. The Obama administration has done so every single year. Yet political and media discussions of the financial crisis have been focused overwhelmingly on how to get more tax revenue to pay for past and future spending.

The very catchwords and phrases used by the Obama administration betray how phony this all is. For example, “We are just asking the rich to pay a little more.”

This is an insult to our intelligence. The government doesn’t “ask” anybody to pay anything. It orders you to pay the taxes they impose and you can go to prison if you don’t.

Then there are all the fancy substitute words for plain old spending– words like “stimulus” or “investing in the industries of the future.”

The theory about “stimulus” is that government spending will stimulate private businesses and financial institutions to put more of their money into the economy, speeding up the recovery. But the fact that you call something a “stimulus” does not make it a stimulus.

Stimulus spending began during the Bush administration and has continued full blast during the Obama administration. But the end result is that both businesses and financial institutions have had record amounts of their own money sitting idle. The rate of circulation of money slowed down. All this is the opposite of stimulus.

What about “investing in the industries of the future”? Does the White House come equipped with a crystal ball? Calling government spending “investment” does not make it investment any more than calling spending “stimulus” makes it stimulate anything.

What in the world would lead anyone to think that politicians have some magic way of knowing what the industries of the future are? Thus far the Obama administration has repeatedly “invested” in the bankruptcies of the present, such as Solyndra.

Using lofty words to obscure tawdry realities extends beyond the White House. Referring to the Federal Reserve System’s creation of hundreds of billions of new dollars out of thin air as “quantitative easing” makes it seem as if this is some soothing and esoteric process, rather than amounting essentially to nothing more than printing more money.

Debasing the value of money by creating more of it is nothing new or esoteric. Irresponsible governments have done this, not just for centuries, but for thousands of years.

It is a way to take people’s wealth from them without having to openly raise taxes. Inflation is the most universal tax of all.

All the pretty talk about how tax rates will be raised only on “the rich” hides the ugly fact that the poorest people in the country will see the value of their money decline, just like everybody else, and at the same rate as everybody else, when the government creates more money and spends it.

If you have $100 and, after inflation follows from “quantitative easing,” that $100 dollars will only buy what $80 bought before, then that is the same economically as if the government had taxed away one-fifth of your money and spent it.

But it is not the same politically, so long as gullible people don’t look beyond words to the reality that inflation taxes everybody, the poorest as well as the richest.

Thomas Sowell is a senior fellow at the Hoover Institute and author of The Housing Boom and Bust.

Note: This piece is part I in a series. Click here for Part II.