Freedom Centers Uncategorized The Tyrannical Gravediggers Of Russia and China ...

The Tyrannical Gravediggers Of Russia and China 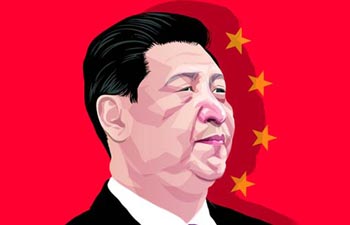 For the casual observer, tyrants like Vladimir Putin and Xi Jinping appear to be possessed with irresistible superpower qualities. In reality, they are constantly overwhelmed by cataclysmic fears, bordering on paralyzing cowardice. The main reason for this sociopathological condition is that they are all irresponsible and unconscionable liars. Yet, more importantly, they do not just lie to others. They also lie to themselves. Consequently, nations that are ruled by these and like minded tyrants will sooner rather than later be irreversibly corrupted to their core and at the end lose their countries. Accordingly, these two political scumbags are constantly lying, smearing and threatening everybody inside and outside their reach with the most unimaginable consequences, if the subjects do not reconcile themselves to their corrupting ideologies.

The goal always is to forge a preconceived notion of those who dare think differently and declare those people the eternal enemies of the tyrants. This capricious division between their subjects, more precisely their dumbed down useful idiots, and their enemies, who exist in the real world and not in the tyrants’ imaginary universe, places the moral onus on the so-called enemies to justify their adherence to reality vis-a-vis the misguided abnormal people who exist in an amoral pseudo reality.

Thus, Putin has been masquerading as an anti-Khrushchev, anti-Brezhnev, anti-Gorbachev as well as anti-Yeltsin statesman, who is permanently ready to take upon the decadent United States of America and its allies, in order to defend the morally pure and victimized Russian people, in which the “organic model” of Russian statehood includes all the arbitrarily defined Slavic peoples. In a principled and law-abiding world, Putin’s resurrection of the schizophrenic thinkers Iwan Alexandrovich Ilyin and Alexandr Gelyevich Dugin’s imperialist ideologies are extremely dangerous, because they signal Ivan the Terrible and Josef Stalin’s battle cry for the final solution of the epochal struggle between the arch-enemy West and the Russian World. In such a context, understanding the Putin phenomenon is essential to the global order across the world. His modus operandi, namely, “if my enemies do not do what I want, I shall annihilate them,” is nothing but the total disregard as well as blatant usurpation of all international principles for the naked antediluvian Russian colonial/imperialist interests.

Almost in unison with his failing colleague in the north, Xi Jinping has espoused the same sham reality in his dealings with the rest of the world. Like his predecessor Mao Tsetung, he declared tyrannically that L’etat c’est moi. Equally, like Louis XIV, he firmly believes that he owns, lock stock and barrel, the People’s Republic of China. Yet, the 1.4 billion Chinese are not his property. Equating himself with his country, does not make him a leader – it places him in the capricious position of a usurper of the people’s will. His bid for an unprecedented third term and the revitalization of Mao’s title “General Secretary of the Chinese Communist Party,” merely conceals the fact that behind the image of seeming political tranquility and material prosperity lurk the weaknesses of his self-generated personality cult, which are based on the crumbling foundations of a dishonest ideology. His “Socialism with Chinese Characteristics” is a phantom that possesses no lasting qualities. His illegitimate expansion in the Pacific Ocean and his preposterous claim to the Republic of China, if he would attempt to enforce it, will surely succumb to the same humiliation as Putin’s unlawful and predatory invasion of Ukraine.

Meanwhile, the Russian tyrant just celebrated his nonexistent victory in Donetsk, Luhansk, Zaporizhia and Kherson amid a very successful Ukrainian counteroffensive to recapture the territories that President Putin recently annexed to the Russian Federation. Adding insult to injury, protests against the not so partial, in actuality general mobilization are growing and the economy is writhing in its death pangs. Moreover, both western alliances and many non allied nations are vying with each other to express their absolute rejection of Russia’s annexation by declaring that President Putin has already made himself the laughingstock of the world. Today, the catalog of problems facing this Russian liar is so extensive that it is no wonder that he is threatening the world with nuclear armageddon.

For these reasons alone, the international community shall not be alarmed and exasperated by the travails of Russian cum Chinese aggression and wonder whether it would be better to compromise, or even give in to these two lying tyrants. Thus, it is incumbent upon the international community to remain united and make the international legal principle a living reality, according to which illegally occupying territories of independent states does not establish the aggressors’ sovereignty over them. Concomitantly, real and permanent international peace and stability can only prevail in a world, in which the right of every legitimate state is unconditionally recognized to live in freedom from any claims that might alone make right.