Freedom Centers Economic Freedom Unemployment 8.1% as More Give Up Looking for Work ...

Unemployment 8.1% as More Give Up Looking for Work 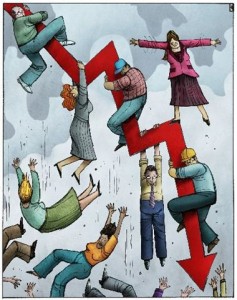 The nation’s most recent jobs report disappointed again with an anemic 96,000 new jobs added in August. Just to keep up with population growth, the economy would need to add more than 130,000 jobs per month. The report estimates an 8.1 unemployment rate for August. “This is definitely a setback for the labor market and the economy,” said Michael Feroli, chief U.S. economist at JP Morgan Chase and a former economist for the Federal Reserve.

For 43 consecutive months, the jobless rate has been greater than 8 percent. And 14.7 percent of Americans are either unemployed or underemployed. Underemployed means, for example, that the worker may have part-time work, but cannot find a full-time job. “We haven’t really gotten out of this recession,” said Pierre Ellis, an economist with Decision Economics.

But the worse news in the August jobs report is that 368,000 Americans left the labor force — meaning that more and more Americans are losing hope and giving up looking for work. This means that for every person who found a job even a part-time job, almost four Americans gave up hope and stopped looking for work. The labor participation rate is the lowest in more than a generation. If these “discouraged” workers are included in the statistics, the unemployment rate tops a staggering 9.6.

In the past year, the jobless rate has fallen slightly — not because of real job growth — but mostly because an ever-increasing number of Americans are losing hope and are giving up looking for work. This is not a sign of improvement. Theoretically, if everyone who is without work gave up and stopped looking, we would have zero unemployment. And President Barack Obama and Vice President Joe Biden could brag about fixing America’s unemployment problem. But that would not mean we have a healthy economy. It would simply mean we had thrown in the towel and

The jobs report says that factory jobs were down with the auto industry providing the largest decline. Experts predict that GM is headed towards bankruptcy again because the bailout money was used to pay-off union retirement funds, not shore-up the floundering automaker.

This casts serious doubt on Obama’s and Biden’s campaign claim that they saved General Motors with a $50 billion taxpayer bailout which still has not been paid back. Almost $600 million was wasted to place the Chevy logo on the uniforms of the Manchester United soccer-team. Meanwhile, General Motors is losing money at a record pace in Europe.

With job growth well below the “keep even” rate of 130,000 new jobs per month, it is clear that the economy is stagnant and job growth nonexistent. Economist Art Laffer says this recovery is the worse and the slowest recovery on record. Laffer says that Obama’s policies have stunted the recovery, slowed job growth and impeded economic gains. Forty-three months of record high unemployment above 8 percent would seem strong evidence of Laffer’s point.

Not only was the August jobs report disappointing, but both the June and July report were amended and ratcheted further downward by a total of 40,000 jobs. Interestingly, virtually every month, the jobless report from the previous month is quietly downgraded.

There has been a growing concern that the Administration is fixing the numbers to hide the unpleasant truth. For example, Gallup polling typically shows higher jobless rates than the Obama Administration’s statistics. And Gallup pegs underemployment at more than 17 percent. As a result, Obama campaign chief David Axelrod bitterly complained to Gallop about its polling and demanded that they use different methods to achieve more favorable results. After Gallup refused to change its methodology or to align its numbers with the Administration’s estimates, the Obama Department of Justice inexplicably threatened to join a suit against Gallup. (See story here)