Do the math, Mr. Obama, you’ve run out of excuses on jobs 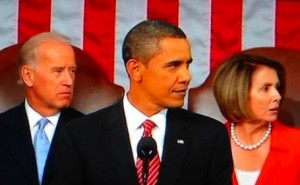 Despite a growing population, fewer Americans have jobs today than when Obama took office. And the jobs pay less, too.

With the release Friday morning of the August job numbers, there are still 261,000 fewer Americans employed than when Obama became president. Almost a million — 822,000 — fewer Americans have permanent jobs.

The middle and upper income jobs lost during the recession are being replaced lower-wage jobs during Obama’s recovery. Middle income occupations accounted for 60 percent of the jobs lost from the first quarter of 2008 to first quarter of 2010, but 58 percent of the jobs created since then have been in lower-wage occupations. While we have lost jobs in skilled construction, real estate, and supervisors, most new jobs are in retail sales and food preparation.

Unsurprisingly, median household income and wealth has fallen during the Obama administration.

Former President Bill Clinton made the argument Wednesday night: “No president, no president — not me, not any of my predecessors — no one could have fully repaired all the damage that he found in just four years.”

But Clinton is wrong.

Democrats may not want to hear it, but Reagan faced an unemployment rate as high as 10.8% and was able to drive it down below 8 percent within 14 months. By contrast, unemployment under Obama peaked at 10.0%, eight months after his “stimulus” was passed, and after another 33 months it is still above 8%.

Remember back in March 2009, just five weeks after the stimulus was signed into law, President Obama was already declaring: “We’re beginning to see signs of progress.” By May, Obama told Americans: the program was “already seeing results.” In September, Vice President Joe Biden announced: “In my wildest dreams, I never thought [the stimulus] would work this well.” But unemployment just kept on increasing. By April 2010, Obama administration announced the summer of 2010 would become known as the “Summer of Recovery.”

Needless to say, we aren’t now close to the 6% unemployment rate that the Obama administration was predicting after the stimulus passed. And four more jobs programs were passed after the stimulus during Obama’s first two years in office, and positive results were promised each time. Yet, instead, this has been the worst recovery on record.

Thursday night in his speech to the Democratic National Convention, President Obama belittled Republican tax cuts. Instead, he proposed more of the same with his tired policies: still more subsidizing “green” energy production, still more special tax treatment for select manufacturing industries, and still more money towards public schools and the teachers’ unions. But rather than letting individual investors determine where they can get the highest return for their money, Obama wants to pick the winners himself by using tax dollars to help them out.

American investors were smart enough not to invest their own money into ethanol, solar, or wind energy. Only government invests in businesses where costs greatly exceed revenue.

Despite Republican attempts to cut taxes, the United States still has by far the highest marginal corporate income tax rate in the world. The US also has the most progressive tax structure, with the richest Americans paying a larger share of total tax revenue. The richest 10% of Americans pay 45% of the taxes. The average for the 34 Organization for Economic Co-operation and Development (OECD) countries is only 32%.

The top income earners are not the only ones who face penalties from earning more. President Obama has increased the effective penalty even for low- and moderate-income families earning more money. Not only do people lose federal earned income tax credits as well as pay federal and state taxes as their income increases, but they also lose the ever-expanding government handouts including housing subsidies, Medicaid, Children’s Health Insurance Program, and food stamps.

The loss of these welfare programs and taxes is so large that when the average person earning between $10,000 and $40,000 makes an additional dollar they lose 82 cents — 53 cents worth of government welfare programs and another 29 cents is lost through reduced tax credits and higher taxes. Who wants to work more when they lose 82 cents of each additional dollar that they earn?

On top of that the regulatory burden facing companies has soared since Obama became president. The World Economic Forum had ranked the US first in competitiveness from when the index started in 2004 until 2008. Yet, we slipped to second in 2009, fourth in 2010, fifth in 2011, and now seventh in 2012. Indexes by other organizations have shown similar drops.

At the beginning of his administration, Obama promised: “If I don’t have this done in three years, then there’s gonna be a one-term proposition.”  Mr. President your time for excuses ended months ago.

John R. Lott, Jr. is a FOXNews.com contributor. He is an economist and co-author of the just released “Debacle: Obama’s War on Jobs and Growth and What We Can Do Now to Regain Our Future” (John Wiley & Sons, March 2012).