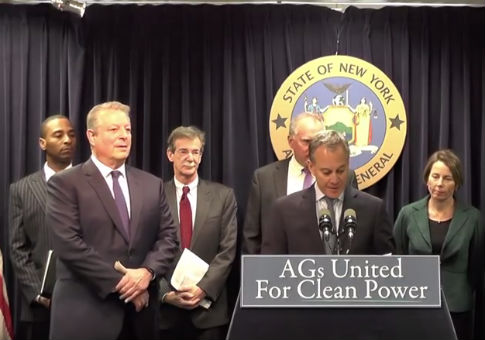 The attorney general of the U.S. Virgin Islands withdrew his subpoena of oil giant Exxon Mobil on Wednesday afternoon, dealing the first setback to a group of Democratic officials seeking racketeering charges against the company.

Exxon told a federal court that AG Claude Walker had agreed to walk away if the company would drop a related lawsuit alleging that the subpoena violated its constitutional rights and the laws of its home state of Texas.

Walker was the third state attorney general, after New York and Massachusetts, to subpoena Exxon Mobil over allegations that it committed fraud and racketeering by misleading customers and shareholders about the risks of climate change.

Walker is the first to walk back the effort against Exxon, but he is also in litigation in Washington, D.C., over a separate subpoena sent to a libertarian nonprofit that received donations from Exxon more than a decade ago.

Both subpoenas have triggered legal action. In a federal lawsuit filed three weeks after it was subpoenaed, Exxon alleged that Walker’s subpoena violated its “rights under the First, Fourth, Fifth, and Fourteenth Amendments to the United States Constitution, the Texas Constitution, and Texas common law.”

District Judge Ed Kinkeane ordered Exxon and Walker to meet no later than July 11 to discuss “the possibilities for a prompt resolution of the case.” Exxon’s filing notified the court that they’d reached an agreement to withdraw both the subpoena and the resulting lawsuit.

Walker had asked for a massive number of internal Exxon documents, including documents pertaining to its internal deliberations and projections about climate change, but also requested communications with nearly a hundred nonprofit groups.

They included conservative and libertarian advocacy groups, but also more mundane organizations such as the Smithsonian Astrophysical Observatory, the Arizona State University office of climatology, and Africa Fighting Malaria.

New York attorney general Eric Schneiderman and Massachusetts attorney general Maura Healey asked for communications with many of the same research and advocacy groups, including the Heritage Foundation, the Competitive Enterprise Institute, and the Cato Institute.

Schneiderman is the leader of a group of 20 state attorneys general that have seized on reports from news organizations funded by environmentalist groups that allege that Exxon misled the public about the risks its product poses.

Exxon and other critics say it is an unconstitutional effort to use state governments’ legal authority to shut down political speech and advocacy with which the attorneys general disagree.

Though Walker has withdrawn his Exxon subpoena, he also subpoenaed the Competitive Enterprise Institute, a libertarian group that used to receive Exxon funding, seeking evidence in its investigation into the company.

Walker has dropped his effort to enforce that subpoena in D.C., where CEI is based, but has not actually withdrawn it. The group is now alleging that the effort violated a DC law against lawsuits designed to censor, harass, or intimidate a public critic. A federal judge heard arguments on that motion on Tuesday.

The larger campaign was orchestrated behind the scenes with leaders of prominent environmental groups and deep-pocketed foundations that fund them and the news organizations whose reporting ostensibly spurred the investigation.

According to internal documents detailing the effort, its goals are to “delegitimize [ExxonMobil] as a political actor,” “force officials to disassociate themselves from Exxon,” “drive divestment from Exxon,” and “to drive Exxon & climate into center of 2016 election.”

Democratic lawmakers have also pressed the Justice Department to bring civil racketeering charges against Exxon over the same allegations. Attorney General Loretta Lynch has said that she referred the case to the FBI, which is deciding whether to prosecute.