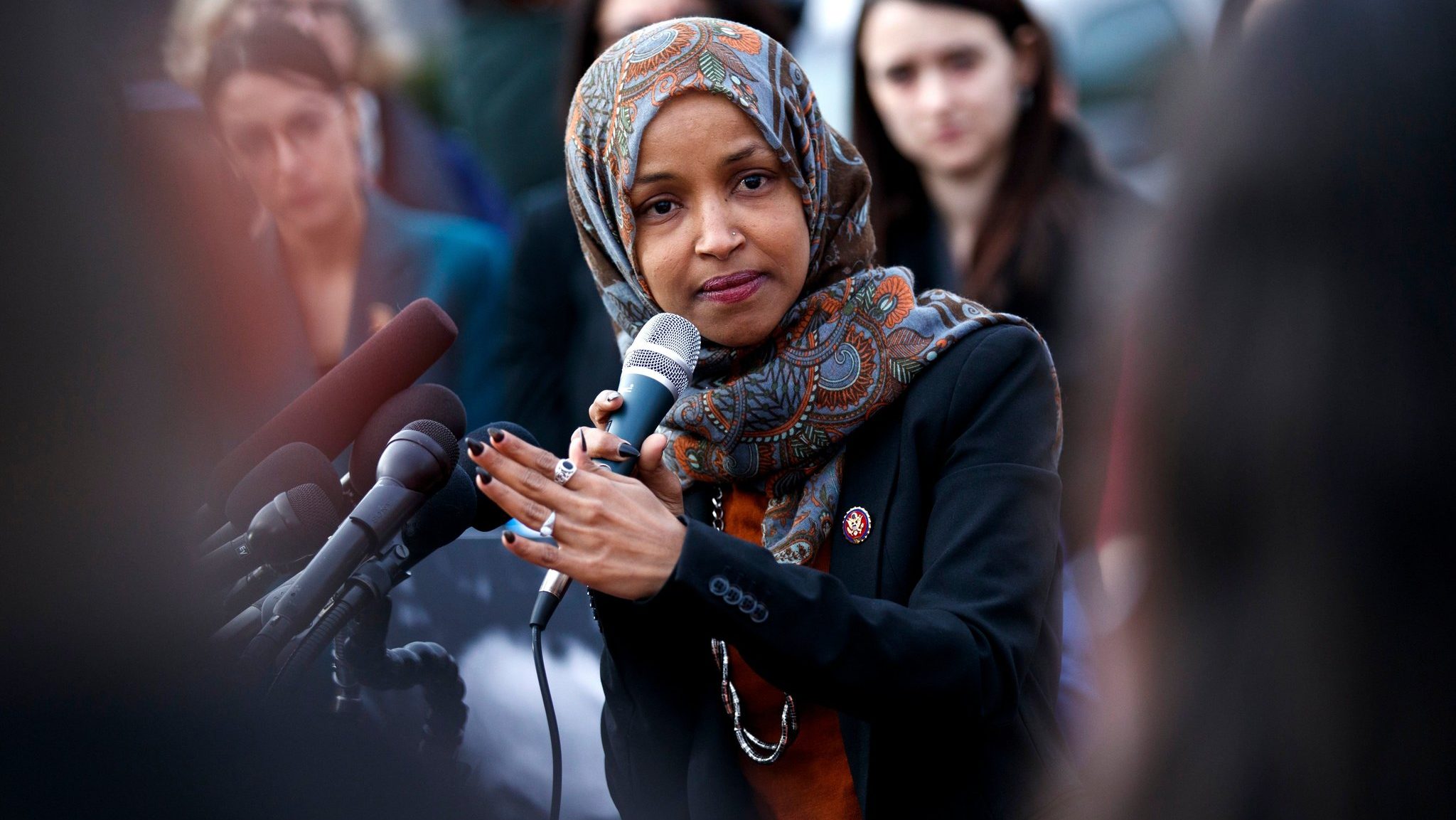 The most amusing part of the Washington Post‘s profile of Representative Ilhan Omar this past weekend was unquestionably the part where they caught her blatantly ripping off classical literature and passing it off as part of her life story. As Omar tells the story, she was once in a courtroom and saw a “sweet, old . . . African American lady” arrested for stealing a loaf of bread to feed her “starving 5-year-old granddaughter.”

The old woman spent two days in jail awaiting trial, and the when the woman was given a fine of $80 that she couldn’t pay, Omar stood up and yelled “Bulls—!” The entire room began to clap. Omar then addressed the judge and said, “And so, Your Honor, you see it’s true, that woman bears no more guilt than you!” Ripping open her jacket, Omar revealed a tattoo on her chest and bellowed “2-4-6-0-1!”

That last part I made up of course, but Omar seriously tried to pretend everything up to and including the loud profanity was true. One wonders how she beat the contempt of court charge. Yet as the Post notes, Omar’s story “echoed the plot of ‘Les Miserables.'” If not entirely fictional, it’s highly embellished; Minneapolis police are not allowed to lock people up simply for shoplifting and the typical sentence is just attending a three-hour class. The Post reports that Omar later acknowledged that “she may have flubbed some facts.”

That was certainly worth a chuckle, but what really threw me for a loop came later on in the piece, when the Post profiled another typical Minnesota Somali-American family. Filsan Ibrahim and her family run a day care, they celebrate Ramadan together, they share jokes around the dinner table, they worked their way through college and graduate school, they got a welcome letter from George W. Bush when they immigrated to the States, they rally behind convicted ISIS terrorists, they lived through the “uncertainty, hope and joy that accompanied her family’s first days in America,” and “have complicated views of their adopted country that mix gratitude, frustration, alienation and pride.”

Wait, what was that one part? About the ISIS terrorists?

A few days later Filsan, her mother and her sisters attended a fundraiser and rally for nine Somalis who had been convicted in 2016 of trying to travel to Syria to fight on behalf of the Islamic State.

Omar had written a letter on behalf of the men on the day she was elected in 2016, urging rehabilitation instead of prison time. “The desire to commit violence is not inherent in people — it is the consequence of systemic alienation,” she wrote the judge. She had known other young men from school who died fighting for al-Shabab, the al-Qaeda affiliate in Somalia.

Since her letter she has kept her distance from the case, which she knew was politically toxic, an easy opportunity for her enemies to paint her as un-American.

Can you imagine? If Omar’s enemies used her public defense of a convicted ISIS terrorist? To “paint her” as un-American?

For Filsan, the trial remained a source of anger and frustration. Her generation of Somali refugees saw America as home, but they lived under a shadow of suspicion. Armed American drones regularly fired missiles into their homeland. In Minneapolis, the FBI was surveilling their mosques and paying off informants.

Filsan had protested the FBI’s “countering violent extremism” program in Minneapolis, which sought to dissuade Somalis from joining terrorism groups, but which she believed stigmatized the Somali community.

Just your average Somali-American family that opposes Obama-created federal programs to peacefully persuade American Muslims to reject radical terrorism and feels “anger and frustration” when radical terrorists are arrested. You’d think the apprehension of nine radical Islamic terrorists in Minneapolis– a hotbed for terror recruitment— would be seen vindication of the FBI’s surveillance and persuasion efforts, but I guess not.

To Filsan, it didn’t make sense. The men on trial had never touched a weapon or left the United States. “I don’t think they knew what they were getting into and I don’t think they need to give up their lives for something that never happened,” she said. “That’s madness.” The heavy sentences, she said, were the product of racism, Islamophobia and the never-ending war on terror.

The men never touched a weapon or left the United States because they were arrested before they went through with their concrete and detailed plan to leave the United States and take up weapons. They knew exactly what they were getting into. Ibrahim surely knows this.

As for the heavy sentences, racism has nothing to do with it. It’s true that the specific terrorist Ibrahim was rallying for, Guled Ali Omar, received 35 years. That was a combination of the fact that he was the ringleader and that he refused to take a plea deal and elected to take his chances at trial. The two other members who refused plea deals got 30 years. Those who took deals got only ten years and those who turned state’s witness got even less prison time. That seems more than fair for plotting to join a genocidal enemy of the state.

About a dozen of Guled’s friends lingered in the parking lot, posing for pictures they planned to post on Instagram. “Fingers up,” someone called out.

Most of the men raised their index fingers, a gesture that symbolizes the oneness of God and has become widely associated with the Islamic State. They flashed the same sign during the trial in 2016, drawing the ire of the prosecutor.

The young Somalis in the parking lot — a mix of men and women — said they didn’t subscribe to the Islamic State’s fanatical interpretation of the Koran. And they certainly didn’t support any terrorist groups. But, on this night, they were trying to send a message — one of Muslim solidarity, alienation and defiance.

You must be kidding.

Imagine this sequence of events: a group of young white, right-wing people attend a rally for, let’s say, the man convicted of threatening to kill Ilhan Omar. In the course of this rally, they tell reporters that they feel anger and frustration at the government’s surveillance of nativist groups and hostility to white nationalism. They downplay the crime– because hey, it’s not like he ever went through with it!– suggest the harsh sentence was politically motivated. Then afterwards, they all head outside and flash the alt-right “okay sign” or grab some tiki torches, but then explain that they don’t subscribe to alt-right beliefs or support alt-right terrorists.

Do you believe, in a million years, that Washington Post reporters would A) credulously parrot the claim they aren’t actually extremists, and B) finish by characterizing it all as a show of “solidarity, alienation and defiance”? Or might they conclude that this rally is at best a hotbed of white nationalist apologists, and more realistically is full of plain old white nationalists?

Alas, the actual extremists and terror sympathizers in questions are part of a liberal constituency, supported by a popular young liberal politician, and are members of a faith group often targeted by the Trump administration. The reporters allowed their biases to blind themselves to reality and the result is absurd: an honest-to-god puff piece of a rally on behalf of convicted terrorists. Take a bow, WaPo.