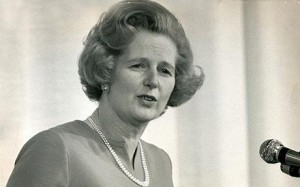 To deny that we failed the people is futile, as well as arrogant. Successful Governments win elections. So do parties with broadly acceptable policies. We lost.

I was a member of the last Conservative Cabinet, from 1970 to 1974, with a share in the collective responsibility for its policies. It seems to me that this involves a further responsibility—to recognise the failures and to try to see that the mistakes are not repeated. . . .

Politicians should not be either professional efficiency experts or amateur industrial consultants. Their concern is with people, and they must look at every problem from the grassroots, not from the top looking down. International interest rates must be thought of in terms of the young couple’s mortgage as well as of the balance of payments.

Politicians must be equally wary of political ideologies. It is not our business to plan the educational system as a sociological abstraction. Our job is to see that children and young people receive the education they need. “Equality of opportunity” is a poor guide if it means the same mediocre schooling for all. The object is to provide a varied system which will give every child the best chance to develop individual intelligence and talents. . . .

I was attacked for fighting a rearguard action in defence of “middle-class interests.” . . . Well, if “middle class values” include the encouragement of variety and individual choice, the provision of fair incentives and rewards for skill and hard work, the maintenance of effective barriers against the excessive power of the State and a belief in the wide distribution of individual private property, then they are certainly what I am trying to defend.

This is not a fight for “privilege;” it is a fight for freedom—freedom for every citizen. . . .

[Current] tax proposals could destroy—or nationalise—a medium-sized family business in two generations and a small farm in one. Industry and agriculture would increasingly become either State-controlled or concentrated into larger units. And experience has shown that neither process makes for long-term efficiency or good labour relations. Worse still, if both saving and enterprise are penalised, those who can do most to increase the prosperity of the workers will simply take their money and their skills abroad. . . . In the end they [those that tax] will destroy all wealth, to the detriment of all.

If a Tory does not believe that private property is one of the main bulwarks of individual freedom, then he had better become a socialist and have done with it. Indeed one of the reasons for our electoral failure is that people believe too many Conservatives have become socialists already. Britain’s progress towards socialism has been an alternation of two steps forward with half a step back. . . . And why should anyone support a party that seems to have the courage of no convictions? . . .

If management is bad and does not adequately consult its workers, it deserves to fail. Our job is to create conditions in which good management can succeed.

We lost because we did not appear to stand firmly for anything distinctive and positive. Sneering at “middle-class values” is to insult the working class no less than the bourgeois. Do British workers have no deep feelings for freedom, for order, for the education of their children, for the right to work without disruption by political militants?

Of course they do. And if they are no more than cash-grabbing anarchists, then we must all bear some of the responsibility and try to show them the way back to sanity. But I do not believe they are. Most of them want to do a fair day’s work in a job that gives them satisfaction—and strongly resent what they regard as State subsidies to shirkers. Most of them deplore violence, truancy and indiscipline in schools, and cannot understand the complaisance of some of the middle-class intellectuals who run the schools. . . .

My kind of Tory party would make no secret of its belief in individual freedom and individual prosperity, in the maintenance of law and order, in the wide distribution of private property, in rewards for energy, skill and thrift, in diversity of choice, in the preservation of local rights in local communities.

Size is not all, any more than economic growth is all. Even efficiency is not enough. People come first—their needs, their hopes, their choice, their values and ideals. We have to understand these first—to be seen to be listening with sympathy and concern. It is important to be able to lead, certainly. But you cannot for long lead people where they do not want to go. . . .

It seems to me that our connections have come loose. I should like to do what I can to help repair them.