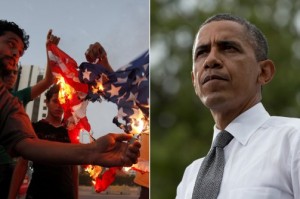 Upon hearing there had been an attack on the U.S. consulate in Benghazi, Libya, that the U.S. ambassador and three other Americans had been killed there and that this murderous assault had been carried out on the 11th anniversary of the 9/11 terrorist attacks, a rational mind might be tempted to conclude that this had been a premeditated act of terror.

The Obama White House and State Department resisted the temptation.

On Sept. 12, the day after the attack, White House press secretary Jay Carney was asked whether “the attack in Benghazi was planned and premeditated.” “It’s too early for us to make that judgment,” Carney said.

The next day, Sept. 13, State Department spokesperson Victoria Nuland subtly pointed to a YouTube video as possibly creating a motivation for the attack. Asked “whether the Benghazi attack was purely spontaneous or was premeditated by militants,” Nuland replied, “[W]e are very cautious about drawing any conclusions with regard to who the perpetrators were, what their motivations were, whether it was premeditated, whether they had any external contacts, whether there was any link, until we have a chance to investigate along with the Libyans … [O]bviously, there are plenty of people around the region citing this disgusting video as something that has been motivating.”

A Sept. 14 Associated Press story described the video in question as 14 minutes of clips from “the amateurish anti-Islam film ‘Innocence of Muslims,’ ” which “depict the prophet Muhammad as a fraud, a womanizer and a madman in an overtly mocking way.” The video had been posted on YouTube.

A reporter asked Carney: “At Benghazi?”

“We certainly don’t know, we don’t know otherwise,” said Carney. “You know, we have no information to suggest that it was a preplanned attack. The unrest we’ve seen around the region has been in reaction to a video that Muslims, many Muslims, find offensive. And while the violence is reprehensible and unjustified, it is not a reaction to the 9/11 anniversary that we know of or to U.S. policy.”

The same day Carney said these things, a CNN correspondent in Benghazi “gained access to the mission, which was, you know, had been evacuated. And found while she was there a journal,” CNN Managing Editor Mark Whitaker explained 10 days later on his network. “And, of course, she didn’t know what it was. But then when she looked at it, it became clear that it was writings from Ambassador Stevens.”

Out of deference to Stevens’ family, CNN did not initially reveal it had discovered the journal. But based on that document and other sources — “including one,” CNN’s Anderson Cooper reported Monday, “who had a detailed conversation with the ambassador, which confirmed much of what we felt important in the journal” — CNN reported: “A source familiar with Ambassador Stevens’ thinking says that in the months before his death, he talked about being worried about what he called the never-ending security threats specifically in Benghazi. The source telling us that the ambassador specifically mentioned the rise in Islamic extremism, the growing al-Qaeda presence in Libya, and said he was on an al-Qaeda hit list.”

On Sunday, CNN’s Candy Crowley asked House Intelligence Committee Chairman Mike Rogers if there was “any protest at all going on” at the Benghazi consulate at the time of the attack.

“I have seen no information that shows that there was a protest going on as you have seen around any other embassy at the time,” said Rogers. “It was clearly designed to be an attack.”

Terence P. Jeffrey is the editor in chief of CNSNews.com. This article was published in the Washington Examiner.