White House playing out the clock on Libya Scandal 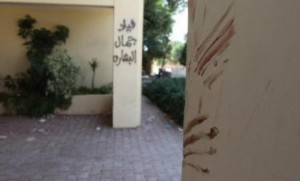 The mother of Tyrone Woods, one of the two former Navy SEALs killed on Sept. 11 in the attack in  Benghazi, Libya is speaking out about the slow pace of the investigation into what went wrong. In fact, to say that the progress is slow, is inaccurate. It has been 18 days since the attack and the FBI has het to even start its investigation in Benghazi. Since the burned out consulate is open and not secured, by the time the FBI arrives, there will be nothing left of value for investigators to examine.

But why is the FBI involved. This wasn’t a bank robbery. It was a terrorists attack on our Embassy or consulate in Libya. Why is the Obama White House treating this like a run of the mill criminal case?  The attack was an act of war. The embassy and the consulate are considered sovereign US soil. Someone born in a US Embassy is a US citizen because it is US soil. So why is an attack on the United States by an organized group of terrorists being treated like a simple crime?

It is revealing that the White House has let 18 days lapse in the investigation, but CNN managed to retrieve Ambassador Chris Stevens’ diary in which he recorded concerns about security. CNN can get in and investigate, but the White House can’t get any government representatives in to investigate.

What is going on here?  Simple.  Obama is hoping to play out the clock. This whole mess hurts his narrative that he killed bin Laden and that he has defeated al Qaeda. So he has no interest in investigating this now. After the election, they can look in to it. But not now.

Does anyone remember how Obama chided Mitt Romney and accused him of playing politics? And anyone remember how the media joined right in and echoed that refrain for almost a week. In hindsight, it is Obama and the White House who have played politics and dissembled about what happened, why it happened, and when the facts were known. Even this week while speaking at the UN, President Obama renewed the tired refrain about how a YouTube video was to blame. This is quite frankly shameful.

Yet, who in the media reports the truth? Who asks the serious questions? How many more times will have to listen to mindless news anchors in the mainstream media ask President Obama, “How do you keep your spirits up during a rigorous campaign?” Or “What is your favorite flavor of ice cream?” Or “What’s the secret ingredient in the White House beer?”

How about some serious questions? How about some important questions? The fawning, servile and obsequious mainstream media is working overtime to reinforce Obama’s campaign themes and narratives. America should take note. The media was once called the Fourth Estate and many viewed it as the fourth branch of government. Others called it a watch dog for democracy. Now they are merely dishonest propagandists.