Freedom Centers Economic Freedom Who benefits and who is harmed by $15 minimum wage ...

Who benefits and who is harmed by $15 minimum wage? 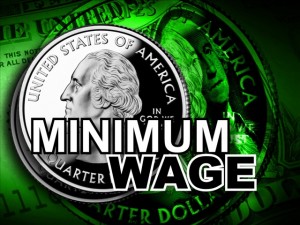 Fourteen to one, in favor.

That was the Los Angeles City Council vote to raise, over the next five years, the city’s minimum wage from $9 an hour to $15. Of course, as Investor’s Business Daily tells us, the $15 per hour really is closer to $20.

Investor’s Business Daily says: “Once all the nonwage costs are added, including payroll taxes, paid sick leave and the big one — ObamaCare’s employer mandate — minimum compensation for a full-time worker could rise as high as $19.28 an hour by 2020, an IBD analysis finds. That would amount to a jump of $10.67, or 124 percent, since June 2014.”

How cynical is the push for higher minimum wage?

The Association of Community Organizations for Reform Now, traveled from state to state, collecting signatures to place minimum wage increase initiatives on ballots. To pull this off, the organization needed to hire lots of workers. In 1995, ACORN came to California to gather signatures for a higher minimum wage. But ACORN sued the state, seeking to exempt itself from California’s minimum wage and overtime laws. Its brief read, “The more ACORN must pay each individual outreach worker — either because of minimum wage or overtime requirements — the fewer outreach workers it will be able to hire.”

Union leaders, who successfully lobbied for LA’s $15-an-hour minimum wage, then asked for an exemption for any firms using union labor! Repeat, the very same union leaders who successfully lobbied for a $15-an-hour minimum wage, then wanted an exemption for businesses that employ union labor and negotiate their wages under collective bargaining. Union bosses want the fear of a $15 minimum wage hike to push companies into unionizing their labor forces.

This push for higher minimum wage will mostly hurt women — a constituency that the left claims to care so much about. According to the National Women’s Law Center, women are at least half of the minimum-wage workers in all 50 states. In New Hampshire, Arkansas, Maine and Pennsylvania, 70 percent of the minimum wage workers are female.

Before the ever-increasing minimum wage laws took effect, a black teenager was slightly more likely to be employed than a white teenager. Economist Walter Williams writes: “In the 1940s and 1950s … teenage unemployment among blacks was slightly lower than among whites, and black teens were more active in the labor force as well. All of my classmates, friends, and acquaintances who wanted to work found jobs of one sort or another.”

Minimum wage and other New Deal policies, according to CATO’s Jim Powell, cost jobs: “The flagship of the New Deal was the National Industrial Recovery Act, passed in June 1933. It authorized the president to issue executive orders establishing some 700 industrial cartels, which restricted output and forced wages and prices above market levels. The minimum wage regulations made it illegal for employers to hire people who weren’t worth the minimum because they lacked skills. As a result, some 500,000 blacks, particularly in the South, were estimated to have lost their jobs.”

Today’s push for a higher minimum wage occurs as the supposed “pay gap” between male and female millennials now approaches extinction. Pew Research Center says: “(T)oday’s young women are the first in modern history to start their work lives at near parity with men. In 2012, among workers ages 25 to 34, women’s hourly earnings were 93 percent those of men. … And women in the younger age cohort were significantly more likely than their male counterparts to have completed a bachelor’s degree ?- 38 percent versus 31 percent in 2013.”

Two years ago, Elissa Shevinsky, described as a “social justice warrior,” complained about “sexism” in high-tech industries. She argued for policies to encourage more women in tech. But Shevinsky later had an epiphany: “I think the more important meaning is to actively choose a path that’s yours — for women to create their own companies and their own infrastructures, to actively seek out people and create places that are a fit for them. Women are martyring themselves trying to change the existing culture, and it’s miserable for everyone.”

In other words, stop acting like victicrats — and take control. Shevinsky now says, “Complaining can be effective but also authoritarian, and often unpleasant for everyone involved. Building something new can be even more impactful, and I believe it’s a healthier approach.”

Former Sony Pictures co-chief Amy Pascal gives equally blunt advice about knowing and getting what you’re worth. After the Sony cyberattack revealed that the studio head paid star Jennifer Lawrence less money than her less-popular male costars, Pascal offered this defense: “Here’s the problem. I run a business. People want to work for less money; I’ll pay them less money. I don’t call them up and say, ‘Can I give you some more?’ Because that’s not what you do when you run a business. The truth is, what women have to do is not work for less money. They have to walk away. People shouldn’t be so grateful for jobs. … People should know what they’re worth.”