Why Aren’t Public Officials Held to Account for Lying? 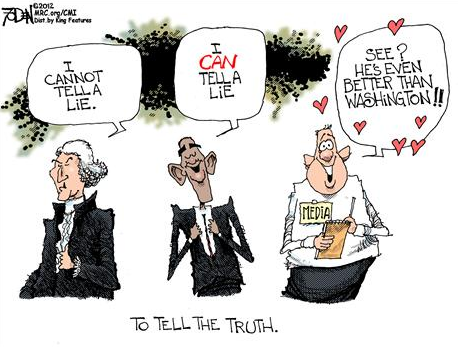 U.S. District Judge Ronald Guzman sentenced television pitchman Kevin Trudeau to 10 years in prison for making false claims in a weight loss book he wrote and was hawking on TV.

In infomercials for “The Weight Loss Cure ‘They’ Don’t Want You to Know About,” Mr. Trudeau claimed food companies and the government had kept secret a “miracle substance” discovered by a British doctor.

People who take the “miracle substance” can eat anything they want, not exercise at all and not gain weight, Mr. Trudeau claimed.

In fact, the weight loss plan in his book called for daily exercise, restricting calorie consumption to 500 calories a day for 14 days, hormone injections available only with a doctor’s prescription and a month of colon hydrotherapy.

A Chicago jury found Mr. Trudeau guilty of criminal contempt because he’d ignored repeated orders from the Federal Trade Commission to stop misrepresenting the contents of his book — the FTC has no control over that, but can police lies told on broadcast networks — and had paid nothing on a $37 million fine the FTC had imposed years before.

Mr. Trudeau has been involved in one scam after another for most of his life, Judge Guzman noted before imposing what the Chicago Tribune said was an unusually lengthy prison term for a contempt conviction.

“He has treated federal court orders as if they were mere suggestions,” Judge Guzman said. “That type of conduct simply cannot stand.”

Mr. Trudeau got what he deserved, said radio talk show host Rusty Humphries. But he said Mr. Trudeau’s claims for his weight-loss program were not as blatantly false as those made about Obamacare by the president and Health and Human Services Secretary Kathleen Sebelius.

The outgoing HHS secretary was “evasive and perhaps misleading” when she told his committee March 12 she doesn’t know how many of those who’ve signed up for Obamacare have paid their first month’s premium, said the chairman of the House Ways & Means Committee.

The Centers for Medicare and Medicaid Services requires insurers to inform it each month of “the full enrollment and payment profile” of those who’ve signed up, said Rep. Dave Camp, R-Mich.

When it’s done under oath, lying to Congress is a felony. Ms. Sebelius wasn’t sworn-in then and now is unlikely ever to be, having announced her resignation Friday.

If a private citizen can be sentenced to 10 years in prison for making false and misleading statements on broadcast television, why, Mr. Humphries asks, can government officials lie with impunity?

No one was forced to buy Mr. Trudeau’s book, he notes. When “shipping and handling” are added in, people who bought it were only out about $30.

People who don’t buy an Obamacare policy could be fined hundreds, in some cases thousands of dollars.

Chiefly because of Obamacare, health insurance premiums for policies bought outside the Obamacare exchanges this year are 39 percent higher, on average, for individuals, and 56 percent higher for families, according to a study by eHealthinsurance, a private online insurance exchange.

It was chiefly the concept of equal protection of the laws — the idea that the rules should apply to the rulers as well as the ruled — that made our government different from most others in the history of the world.

The laws which protect us from con men like Kevin Trudeau should be applied as well to government officials who abuse their authority.

Because prosecutors have too much discretion, which too many abuse because they have “sovereign immunity,” our criminal justice system has become a “crime,” said University of Tennessee Law Professor Glenn Reynolds. At a minimum, prosecutors should be subject to civil damages for misconduct, he said.

So should all other government officials — especially at the IRS, where politically motivated misconduct can ruin lives and swing elections, as we’ve seen in the targeting of Tea Party groups.

And if the FTC can fine private citizens who lie to us on television, there should be penalties too for government officials who tell lies as blatant as those that have been told about Obamacare.

Jack Kelly is a columnist for the Pittsburgh Post-Gazette and The Blade of Toledo, Ohio. This article was published at Real Clear Politics.