He’s defended virtually every Communist tyrant he’s ever been asked about over the past 50 years. 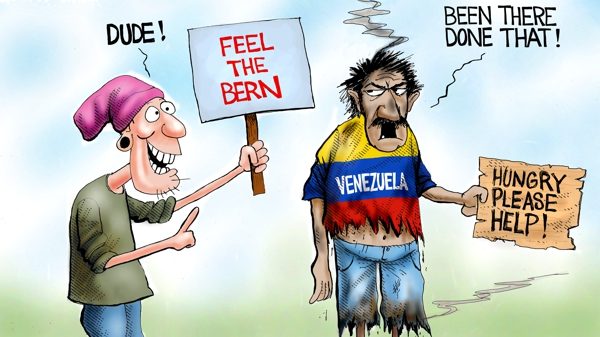 Did you know that infamous Nazi Hermann Göring was a great lover of animals, a protector of birds, and head of the forestry service in Germany? Unless you’re a history buff, probably not. After all, almost no one feels the need to preface their comments about the Third Reich with “Sure, the authoritarianism was pretty bad, but, boy, that Göring was one hell of an environmentalist!”

Western elites, however, like to use this kind of absurd criterion whenever they talk about socialism, ignoring its vast failures and praising its piddling and alleged successes — you know, “Denmark,” but not Algeria, Albania, Angola, Bangladesh, Bulgaria, Burma, Cambodia, China, Congo, East Germany, Ethiopia, Hungary, Latvia, Mongolia, Romania, Somalia, Venezuela, Vietnam, Yemen, Yugoslavia, and so on and on.

And unlike many modern progressives, Bernie Sanders is old-school, still in the habit of praising old comrades. “When Fidel Castro came into office, you know what he did? He had a massive literacy program. Is that a bad thing?” Bernie told 60 Minutes this past weekend, reacting to criticism of his near-complete praise of the dictator back in the 1980s.

The answer is: Yes, massive literacy programs instituted using the machinery of a tyranny are, indeed, a bad thing. For one thing, you can institute massive literacy programs without authoritarianism, just as you can build impressive highways without fascism or alleviate most poverty without collectivism. Just ask the United States, or any other capitalistic nation with wealth and high literacy rates.

Even then, Sanders is regurgitating Communist propaganda. Cuba already had the highest literacy rate in Latin America before the revolution, and it basically kept trending in the same direction as every other nation in the region. When Castro triumphantly entered Havana in 1958, he didn’t bring truckloads of books; he ordered thousands of arrests and summary executions. When Castro “came into office,” he canceled elections, terminated the free press, and turned Cuba into the island prison that still exists today.

Cubans haven’t been able to freely read about their own oppression since Castro took power. (Cuba, though, has nearly eradicated the scourge of “inequality,” with most people making around 20 bucksa month.) And the only possible reason any American would feel the need to defend that dictator’s programs — Sanders once said Castro “educated the children, gave them health care” — is because they’re sympathetic to the cause.

What might be “helpful” in explaining “the nuances of [Sanders’s] views on the Soviet Union & the international left would be a degree of literacy about them from commentators,” CNN’s Andrew Kaczynski recently noted. Bernie, after all, “was always critical of authoritarianism in the Soviet Union.”

Can you imagine this kind of goodwill being extended to someone who had spent 50 years praising fascist regimes? It’s truly unfathomable. The Soviet Union was authoritarianism — it had no other way to exist. When Sanders was honeymooning in Moscow, refuseniks — fellow Jews he didn’t think enough about to mention once between the singing and drinking — were still begging to leave the place.

But okay, let’s concede for the sake of argument that Bernie was genuinely impressed by some of the commissars’ more liberal reform ideas. Sanders claimed that Americans could learn a lot from the Soviet Union. So which of these nuanced ideas did Bernie admire? Does he still admire them? It’s a shame there’s no one at CNN who has access to the candidate and can ask these questions.

When Vox’s Ezra Klein, joining the effort to reimagine Sanders as some innocuous idealist, argued that the now–Democratic Party favorite isn’t really running on socialist economic ideas (highly debatable) but rather on a “socialist ethic,” “a deep, animating belief that our political and economic system is unjust,” he inadvertently hit on an ugly truth.

There’s little doubt that Bernie believes collectivism — the discarding of property rights, for starters — offers a more equitable and decent option than capitalism. Bernie’s career has never been propelled by policy, most of them untenable here, but rather by class warfare.

And younger voters are, and often have been, more susceptible to the “ethics” of socialism. At this point in history, they’ve not seen the economic infeasibility of those ideas, many of the massive disasters spawned by them, or the coercion that’s inevitably required to make them “work.”

Or, maybe they don’t care.

A number of people – some on the right, who are increasingly comfortable with statist economic ideas — have told me that no one wants to relitigate the 1960s or Bernie’s old opinions. “Socialism” is not the pejorative it once was. Voters, they say, are uninterested in a candidate’s decades-old actions or positions.

I suspect there are a few thousand people in Florida who still care very much about Cuban totalitarianism and who might disagree. It’s also worth remembering that Bernie defended a Communist dictator this weekend — a dictator whose brother still holds millions of people hostage. Bernie has never walked back his positions.

No, Bernie isn’t Stalin, but he also isn’t some naïve college freshman high off of reading his first Chomsky screed. Bernie is a socialist. He’s been a lifelong defender of authoritarians. We’re debating his positions. If it were really about “Denmark,” Bernie wouldn’t have defended virtually every Communist tyrant he’s ever been asked about over the past 50 years. This is who he was, and more importantly, this is who he is right now.