Freedom Centers Constitutional and Political Freedom Why the IRS IG Stopped with an Audit ...

Why the IRS IG Stopped with an Audit 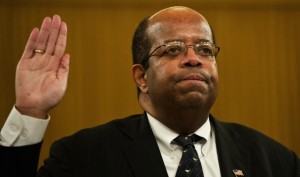 Among all the unanswered questions about the IRS’s illegal targeting of conservative organizations, one is most crucial: Who ordered this extreme scrutiny?

Amazingly, IRS inspector general J. Russell George, responsible for the investigation asking those questions about the IRS, has testified that he did not obtain that information.

Details of that testimony are interesting. Representative Tom Graves (R., Ga.) asked, “Have you asked the individuals who ordered them to use this extra scrutiny to punish, or penalize, or postpone, or deny?” George turns around to confer with his assistant. Just the fact that the inspector general had to confer to know the answer to this crucial question is amazing. George’s assistant says something to him that is not recorded, but one can see the assistant shaking his head back and forth. Then George responds publicly to the question, saying, “During our audit, Congressman, we did pose that question and no one would acknowledge who, if anyone, provided that direction.”

Anyone who knows anything about the rights and responsibilities of an inspector general has to be shaking his head in disbelief at George’s explanation. First, every employee of the government has the responsibility to cooperate with and provide information to an IG concerning his work.

Second, George was particularly careful to limit his answer to the “audit phase.” Every IG has two procedures to obtain information. One is audit procedure, to which IG George referred. That’s generally limited to accounting analysis, to determine whether there may be reason to open an investigation. Once there is reason — and there clearly was reason here, given the obviously illegal conduct — the IG opens an investigation, in which investigators, not auditors, pose the questions, the department employees are placed under oath, and, as a federal court has approved, informed that “failure to answer completely and truthfully may result in disciplinary action, including dismissal.” The question is why George’s office didn’t do this immediately.

From my personal experience as an IG of another agency, I suspect the answer. I do not blame IG George personally, as he is a career civil servant who depends on a steady salary and, thereafter, a pension.

But I learned, through being fired by the Obama administration, that performing one’s responsibilities as one should, and potentially adversely affecting the administration’s image, is not the way to keep one’s job. (Fortunately, I was not dependent on my federal IG salary.)

That reality was made apparent to me — and, through what happened to me, to all IGs — when I supported my staff of longtime dedicated civil servants, who had recommended taking action against one Kevin Johnson, a former NBA player who had misused, for personal purposes, about $750,000 of an AmeriCorps grant intended for underprivileged young people. What I did not then know was that he was a friend and supporter of President Obama — a fact that caused the proverbial you-know-what to hit the fan.

Without detailing all that happened, the bottom line was that I started to receive pressure to drop the case against Mr. Johnson. When I declined to repudiate my staff’s work, the guillotine fell: I was summarily telephoned that if I did not resign in one hour, I would be fired. And I was, along with my special assistant, John Park. The Wall Street Journal editorial board wrote of my firing: “The evidence suggests that [President Obama’s] White House fired a public official who refused to roll over to protect a Presidential crony.”

Similar questions have been raised about other IGs who somehow have been discarded. Amtrak IG Fred Weiderhold, Treasury special IG Neil Barofsky, and International Trade Commission IG Judith Gwynn all left their positions after disputes that weren’t appreciated by the administration, giving more reason for others to go easy with the administration. Further, the president has significantly failed to fill IG vacancies in important agencies (State, Interior, Labor, Homeland Security, and USAID) – well-documented by former IG Joseph Schmitz — demeaning the importance of the IG position.

This administration’s treatment of IGs is not conducive to active, independent, and objective inspectors general, and explains at least in part why key questions about the IRS still have not been asked or investigated.

Gerald Walpin was nominated by President George W. Bush in 2006 as inspector general of the Corporation For National and Community Service, and fired by President Obama in June 2009. He is the author of The Supreme Court vs. The Constitution (Significance Press, 2013). This article was published in at National Review Online.