Freedom Centers Constitutional and Political Freedom Why the ‘threat’ on Bob Woodward matters ... 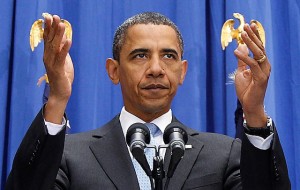 It also may not mean much that the White House press corps got teed off when they weren’t allowed access to President Obama as he played golf with Tiger Woods. This, too, would be an oversight.

Though not comparable — one appeared to be a veiled threat aimed at one of the nation’s most respected journalists and the other a minor blip in the scheme of things — both are part of a pattern of behavior by the Obama administration that suggests not just thin skin but a disregard for the role of the press and a gradual slide toward a state media.

This is where oversight can become dangerous.

Understandably, everyday Americans may find this discussion too inside baseball to pay much mind. Why can’t the president play a little golf without a press gaggle watching? As for Woodward, it’s not as though the White House was threatening to bust his kneecaps.

Add to these likely sentiments the fact that Americans increasingly dislike the so-called mainstream media, sometimes for good reason. Distrust of media, encouraged by alternative media seeking to enhance their own standing, has become a tool useful to the very powers the Fourth Estate was constitutionally endowed to monitor. When the president can bypass reporters to reach the public, it is not far-fetched to imagine a time — perhaps now? — when the state controls the message.

To recap: Woodward recently wrote a commentary for The Post that placed the sequester debacle on Obama’s desk and accused the president of “moving the goal posts” by asking for more tax increases.

Before his piece was published, Woodward called the White House to tell officials it was coming. A shouting match ensued between Woodward and Gene Sperling, Obama’s economic adviser, followed by an e-mail in which Sperling said that Woodward “will regret staking out that claim.”

Though the tone was conciliatory and Sperling apologized for raising his voice, the message nonetheless caused Woodward to bristle.

Again, Woodward’s kneecaps are probably safe, but the challenge to his facts, and therefore to his character, was unusual, given Woodward’s stature. And, how, by the way, might Woodward come to regret it? Sperling’s words, though measured, could be read as: “You’ll never set foot in this White House again.”

When reporters lose access to the White House, it isn’t about being invited to the annual holiday party. It’s about having access to the most powerful people on the planet as they execute the nation’s business.

Inarguably, Woodward has had greater access to the White House than any other journalist in town. Also inarguably, he would survive without it. He has filled a library shelf with books about the inner workings of this and other administrations, the fact of which makes current events so remarkable.

Woodward, almost 70, is Washington’s Reporter Emeritus. His facts stand up to scrutiny. His motivations withstand the test of objectivity. Sperling obviously assumed that Woodward wouldn’t take offense at the suggestion that he not only was wrong but was also endangering his valuable proximity to power.

He assumed, in other words, that Woodward would not do his job. This was an oversight.

This is no tempest in a teapot but rather the leak in the dike. Drip by drip, the Obama administration has demonstrated its intolerance for dissent and its contempt for any who stray from the White House script. Yes, all administrations are sensitive to criticism, and all push back when such criticism is deemed unfair or inaccurate. But no president since Richard Nixon has demonstrated such overt contempt for the messenger. And, thanks to technological advances in social media, Obama has been able to bypass traditional watchdogs as no other president has.

More to the point, the Obama White House is, to put it politely, fudging as it tries to place the onus of the sequester on Congress. And, as has become customary, officials are using the Woodward spat to distract attention. As Woodward put it: “This is the old trick . . . of making the press . . . the issue, rather than what the White House has done here.”

Killing the messenger is a time-honored method of controlling the message, but we have already spilled that blood. And the First Amendment’s protection of a free press, the purpose of which is to check power and constrain government’s ability to dictate the lives of private citizens, was no accident.

This article first ran March 1, 2013 in the Washington Post.