With greater risks, weaker capability is a bad strategy 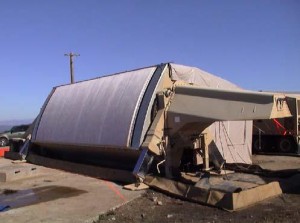 Russian President Vladimir Putin is willing to invade neighboring nations to rebuild the former Soviet-era empire. Iran is on the cusp of developing nuclear weapons. North Korea is developing more powerful and more accurate ballistic missiles. China’s military is growing and modernizing as never before. Despite these growing threats, key defense programs are being cut with little regard for the increased risks.

We must ask ourselves a serious question — why are we shortsightedly cutting critical defensive systems in a time of increasing risk?

An example of these short-sighted military cuts is the Army Navy/Transportable Radar Surveillance (AN/TPY-2). In 2011, national security and military experts determined that we needed a minimum of 18 high tech TPY-2 radar systems. These radars are highly capable and can search for, locate, and discriminate between real risks and benign objects. They are so powerful, they can detect, track, and distinguish objects smaller than a basketball from more than a thousand miles away. These radars can also guide THAAD anti-missile batteries or be forward based to scan the horizon for danger and attacks, protecting our troops and the homeland.

In 2011, military planners determined that we needed 18 TPY-2 radars. At that time, many in government thought we were “resetting” our relationship with Russia, that economic sanctions would stop Iran’s nuclear program, and that tensions with North Korea would ease. None of these expectations materialized. Additionally, the number of hostile ballistic missiles has increased. Before the end of the decade, the number of hostile ballistic missiles will rise by almost 30 percent. Those missiles will also have greater range and accuracy.

Despite the growing risk, in 2012, budget cuts reduced the number of TPY-2 radars from 18 to 11. At that time, the drastic cuts were justified by citing the promise of future development of another radar. But in 2013, that future radar was discontinued. Yet, only one of the slashed seven radars was restored — leaving us six radars short.

Meanwhile the risks have been escalating and our ability to meet those risks has been diminishing. This is not smart policy. It not only makes us more vulnerable, it signals to world leaders that we are not serious about defense. It emboldens actors like Russia’s Putin who clearly sees America as a declining power. China, Iran, North Korea, and even many of our allies are coming to the conclusion that we are in decline. Our defense policies are making it easier to come to that conclusion.

Whatever modest sums we think we are saving by cutting critical defense systems, it is a bad bargain. These radars cost about $170 million each. That may sound like a lot of money to us regular folks who think $3.50 is a lot to pay for a gallon of gasoline, but it is extremely modest next to the catastrophic human and economic costs of losing thousands of war-fighters in the battlefield or of rebuilding an American city. With what has been wasted on federal and state websites that don’t work properly, we could have purchased the necessary remaining six TPY-2 radars and had money left over.

What are the costs — economically and defensively — of a world in which dictators and oligarchs around the globe are emboldened to press their advantage in regional conflicts to strengthen their hand in the international arena? Will economic trade with the United States look as good when other nations can threaten our partners and we cannot offer any relief? There are real economic costs to appearing weak. Additionally, we are not safer and the world is not more secure if America cannot properly defend itself and protect its troops from growing threats.

Congress must restore funding for the original 18 radars immediately. We likely need to additional radars to meet the growing risks. While there is certainly waste in government, slashing our military isn’t an effective or wise way to reduce wasteful government spending. Our current approach will only embolden our adversaries, weaken our standing in the world, and diminish our economic strength.

George Landrith is president of the Frontiers of Freedom, a conservative think tank promoting free-market and deregulatory policies. This article was published in The Hill.