Anatomy of 2020: Weighing Issues, Candidates, and the State of Our Union

Impeachment, and then what? 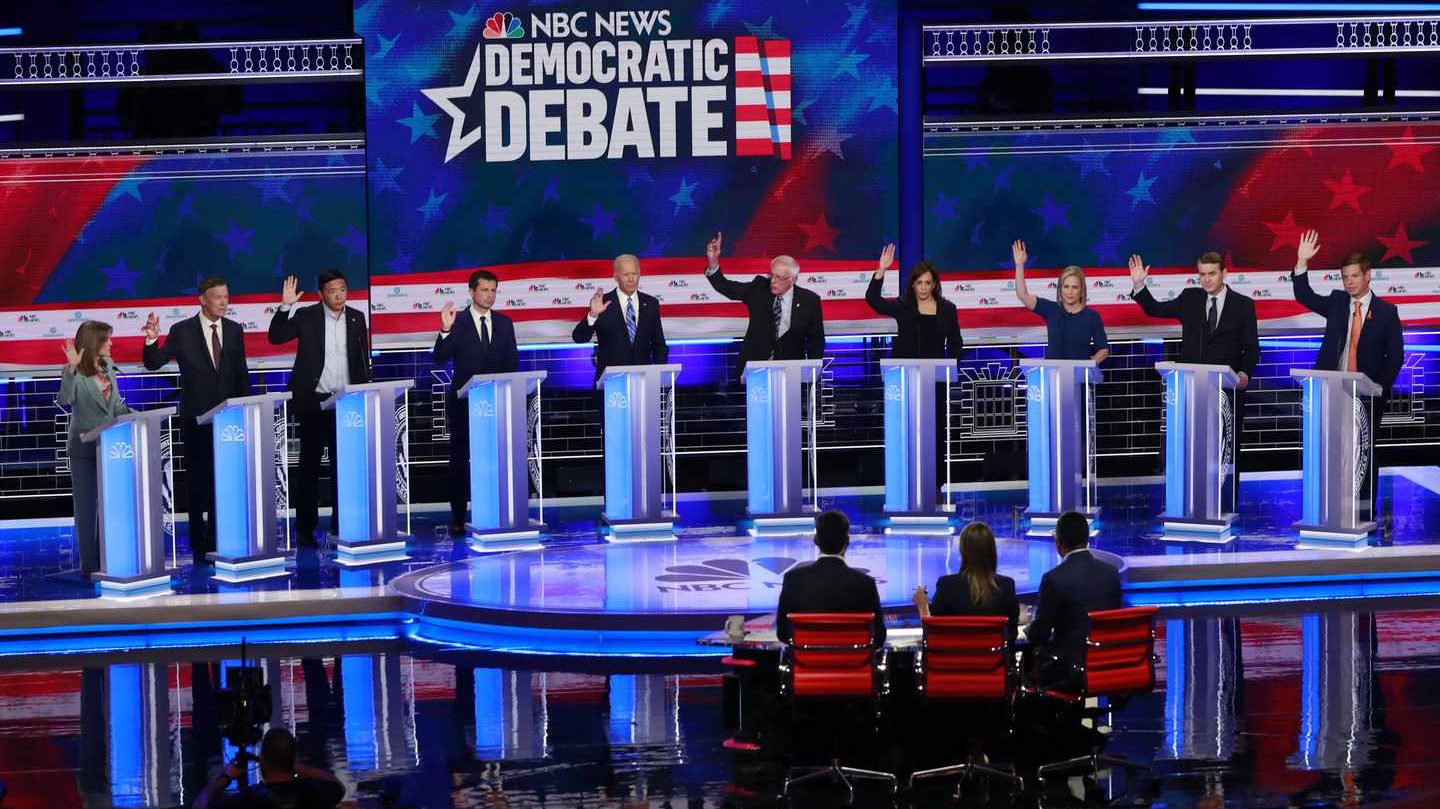 In the 20th century, no Congress brought impeachment proceedings against a first-term president facing a reelection. Both the Nixon and Clinton efforts were aimed at reelected presidents, perhaps on the theory that there was supposedly no other means of bringing them to account once they had been elected twice.

In contrast, Trump faces reelection in about a year. The prevailing mood may soon be just to let the voters adjudicate his purported sins and for a year allow the Congress to get back to — or begin — governing.

The makeup of the Senate matters. Nixon resigned before House impeachment because he feared that, if he were impeached, there might be enough Republican senators to give the Democratic majority a possible two-thirds vote in the Senate to convict him, given that the media hated his guts and the economy was souring and draining public support.

Bill Clinton knew that impeachment, facts aside, did not matter much, because the Republican Senate majority was never going to find the necessary votes to convict him, the media was on his side, and the economy was still robust.

In Trump’s case, there is little likelihood that a Republican Senate majority will lose control of its membership to render a two-thirds majority guilty vote. The economy is strong, and impeachment will become unpopular when the public knows that it will not, and cannot, remove a president. The Democrats are more likely seeking a symbolic 51 percent conviction vote, and a year of “the walls are closing in” anti-Trump chant in the press.

Polls matter. When the media and Democrats started impeachment stories and investigations, Nixon’s favorability was near 70 percent, after his landslide reelection and second inaugural. After twelve months of Watergate, he ended 1973 at about 30 percent approval. When he left office in August 1973 before impeachment, his approval was at about 24 percent.

Clinton, in contrast, enjoyed about 70 percent favorability when impeachment started and he went down only about 10 points — before rebounding and leaving office impeached but quite popular at 65 percent approval. The therapeutic Clinton lived in a pre-Internet age, and “I feel your pain” still resonated.

Three years’ worth of talk of Trump impeachment waxes and wanes. His polls accordingly slide to the low forties when “bombshells” and “turning point” frenzies flood the media, and then they inch back up to the middle forties when the bombast passes.

At this point in his presidency, Bill Clinton was gradually climbing back to near 50 percent approval; Barack Obama was right where Trump is now, at about 42-43 percent. It is hard to know whether impeachment helped or hurt Clinton because the economy was booming, he was seen as bipartisan, and the debt was finally declining. Impeachment was either irrelevant to his status or seen as a threat to it. Either way, Clinton was popular right before and after impeachment.

In Trump’s case, it may be that he ends up at about 44 percent favorability after the impeachment circus either fades or is realized, about where he was when the whistleblower hysteria commenced.

Both prior impeachment efforts were transparent, not just because key congressmen such as Peter Rodino and Newt Gingrich followed protocols, but also because both impeachments were built on damning cases from the work of special counsels. They could afford, then, to be transparent and allow the minority to make its case in the manner of most Judicial Committee hearings. In Trump’s case, however, a special-counsel investigation of 22 months’ duration has already cleared the president and not recommended a criminal referral, and there is no legal case for impeachment.

Impeachment Now . . .
For all the bluster, it is hard to see how the Democrats enjoy a winning hand. The catalyst for this version of the latest episode of the serial coup was the late, great “whistleblower” complaint. But by any definition, the anonymous leaker is by no means a whistleblower. He did not go first to the IG, but to Adam Schiff’s staff, a fact Schiff abjectly lied about. The rules prohibiting hearsay complaints were recently and mysteriously changed to facilitate the complaints like those of the current leaker — hearsay that a short time ago would not have been permissible.

The melodrama allegations of quid pro quo deal-making with the Ukrainian president were belied by Trump’s own release of the transcript of his call. The details showed bluster, not high crimes and misdemeanors, and it did not even match the whistleblower’s second- and third-hand versions of the call — a fact emphasized by Schiff’s bizarre made-up rendition, during a congressional hearing, of the transcript, which Schiff branded a “parody.” That the once coveted whistleblower will likely fade back into the bureaucratic abyss — without Democrats wanting him to be seen, heard, or cross-examined — is a testament to just how ridiculous is the latest iteration of impeaching Trump.

The word “Ukraine” now conjures up Joe and Hunter Biden as much as Trump. So its evocation serves as a boomerang, in either hurting or eventually taking out the stubborn Democratic front-runner.

Nancy Pelosi still has not called a vote for either a former inquiry or formal impeachment. She apparently wishes to allow Adam Schiff’s Intelligence Committee — the absurd place to start an impeachment “hearing” — to run wild behind secrecy, redactions, and refusals to call in minority witnesses and allow cross-examinations, in hopes that the carnival drives down Trump’s numbers before the public puts a stop to the freak show. Again, why not — given that the whistleblower could never sustain questions about his prior relationships with Joe Biden, Schiff, and Schiff’s staff, and about liberal lawyers prepping his complaint, and the actual leaking sources of his allegation?

The impeachment modus operandi for a while longer is by now old hat: Schiff calls in a supposed friendly witness and leaks the opening statement to the media, the latter declare it proof of Trump’s guilt, and then he keeps under wraps incriminating cross-examination questioning, if it even occurs, of the witness. The public already knows that such procedures are foreign to the American experience and violate the spirit of the Constitution — the resort of a Star Chamber inquisitor afraid he has no real case and that he’ll look stupid publicly pursuing such a chimera.

Giving Schiff such power was like arming an arsonist with a fuel tanker. Schiff has been serially caught in a number of outright lies and double-dealing. More will follow, because he is ignorant and arrogant — and oblivious to both. “Impeachment” is now a construct to divert from the Trump record, goad Trump into Twitter-frenzies, and drive down his polls to the high thirties — necessary for a serious impeachment bid.

If impeachment does not occur by Christmas, and it may well not, then the news cycle will preempt coverage of Schiff’s fading melodrama, especially if there are referrals for, or actual, indictments of, Obama-era intelligence officials. The extremism voiced on the Democratic stage will not help impeachment. The candidates themselves may come to resent the diversion of media coverage away from their candidacies and chafe if there is no compelling evidence for the impeachment stampede. In any case, far from the Horowitz, Barr, and Durham investigations being diversions from impeachment, the latest round of impeachment frenzy was likely designed to divert from the final unfolding of the greatest political scandal of the last half-century: the Obama-era intelligence agencies’ efforts to derail a campaign and then subvert a presidency.

The Issues
None of the major issues aired on the democratic debates poll at 51 percent or above — not the Green New Deal, reparations, the abolishment of ICE, open borders, Medicare for all, free tuition and cancellation of student debt, a wealth tax, legal infanticide and late-term abortions, and on and on.

Rather than introduce any of these agendas in Congress, Democratic House and Senate members obsess over Trump. Democrats may scream “Now Trump has a record,” and he certainly does. But it is mainly characterized by near-record-low unemployment, massive new gas and oil production, strong growth, and a vibrant stock market. Trump pushed, as he promised, his four signature agendas, designed to separate him from all 16 of the 2016 primary candidates — being tough on China, unfair trade, and open borders; and having fewer optional overseas military interventions — often against congressional and court opposition.

All caused hysterias, but the public more or less supports calling Beijing to account, securing borders, insisting on reciprocal and symmetrical trade, and it opposes intervening again in the Middle East, given past displeasure with Afghanistan, Libya, Iraq, and Syria, and de facto U.S. independence from Middle East oil.

The Candidates
The Democratic field resembles that of 2003 as it was entering Bush’s reelection year of 2004, when unhinged Howard Dean was the front-runner, and blow-dried phony John Edwards seemed the only alternative — until old warhorse John Kerry entered to reassure Democratic donors that they would have a choice between a quasi-socialist and a helium-filled suit. The tripartite choice now is between a 78-year old who is an avowed but increasingly frail socialist; a 70-year-old who has in the past fabricated her identity and is running as a socialist in all but name; and a 76-year-old white guy who has trouble stringing together simple sentences and thoughts, and who failed in two earlier presidential bids due to plagiarism, lies about his bio, and racially insensitive remarks.

There are no moderate fringe candidates pulling any of them to the center, but rather incompetent, off-putting hard leftists such as the hyperactive Beto O’Rourke, the self-righteous Pete Buttigieg, the whiny Kamala Harris, the incoherent Cory Booker, and a host of other forgettables. If Warren or Sanders is nominated, neither will raise much money — given that Wall Street, Corporate America, and Silicon Valley do not equate their Democratic loyalties with a suicide pact.

If Biden survives, he will raise a great deal of cash, and his future depends on how well he remembers where he is, whom he is surrounded by, and what he is supposed to say.

The State of the Union
No one knows what the state of the union will be in November 2020. If unemployment stays near the near-record peacetime low of 3.5 percent, the economy still chugs along at 2 to 3 percent growth, and there is a decrease in illegal border crossings and staged caravan melodramas, Trump will be in a good position against any Democratic candidate to repeat his 2016 performance of winning the Electoral College while losing the popular vote. A Warren or Sanders McGovern- or Mondale-like candidacy would make his reelection much more likely.

Scandal, Wars, and Depression
What sinks presidencies, either preventing reelection or de facto ending them in stasis and crises are unpopular wars (Vietnam, Iraq), perceived recessions (1980, 1992), or major scandals (Watergate). Trump may cause furor by pulling back tripwire troops in Syria, but the move will probably continue to poll at over 50 percent with the public. He is unlikely to insert forces in optional engagements. A tit-for-tat missile or bombing response to an Iranian or ISIS attack would likely win approval.

Impeachments and scandals, as the case of Bill Clinton reminds us, are two different things. So far, Donald Trump is the most transparent, investigated, and cross-examined president in history. The result is not much dirt, but a lot of now-predictable and boring duds — the voting machines, impeachment 1.0, the emoluments clause, Stormy, Michael Avenatti, Michael Cohen, the 25th Amendment, the McCabe-Rosenstein Keystone Kops coup, Robert Mueller’s investigation, taxes, and now Ukraine.

The public may find the latest blood sport amusing at first and support an inquiry. But as it drags on and Schiff burns up the Constitution, they will tire and prefer to weigh in during the election — when they will likely opt for a continued resurgent U.S. and a strong economy over socialism and finger-wagging at a sinful America.