Nonpartisan Report: Medicare For All Would More Than Double Your Taxes And Bankrupt The Nation

An individual earning near the national median at $50,000 a year would pay more than $17,450 more per year in taxes to fund Democrats’ Medicare for All proposal. That’s not even half of it. 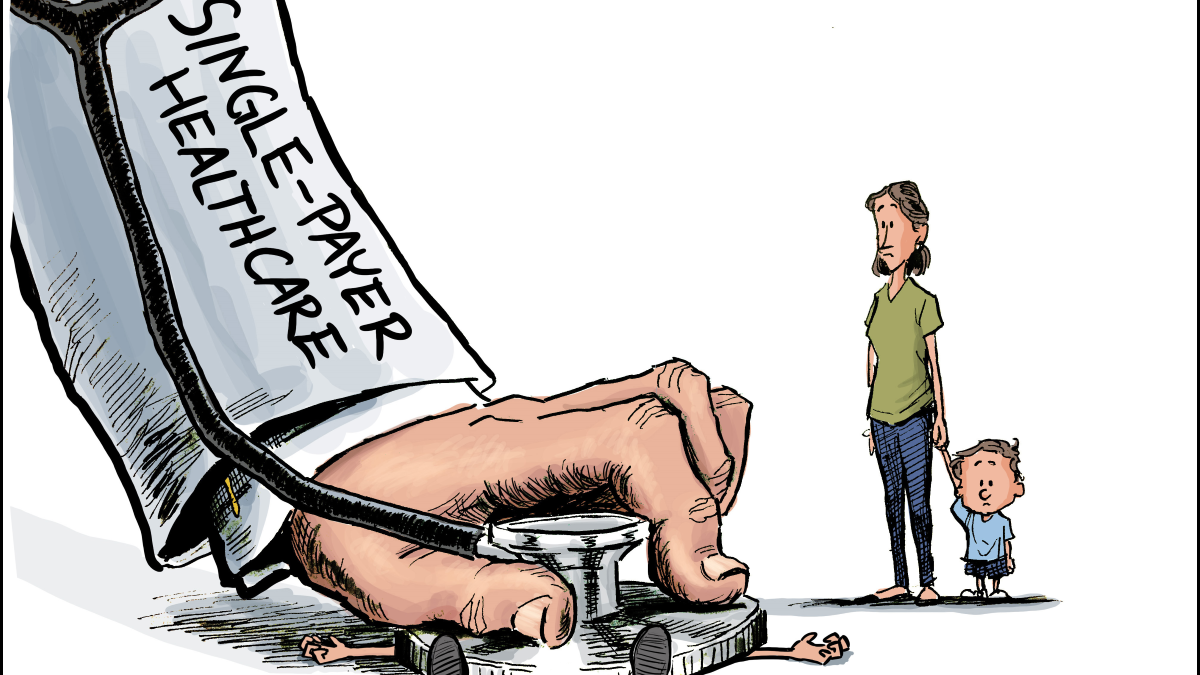 Democratic candidates for president continue to evade questions on how they will pay for their massive, $32 trillion single-payer health care scheme. But on Monday, the Committee for a Responsible Federal Budget (CRFB) released a 10-page paperproviding a preliminary analysis of possible ways to fund the left’s socialized medicine experiment.

Worth noting about the organization that published this document: It maintains a decidedly centrist platform. While perhaps not liberal in its views, it also does not embrace conservative policies. For instance, its president, Maya MacGuineas, recently wrote a blog post opposing the 2017 Tax Cuts and Jobs Act, stating that the bill’s “shortcomings outweigh the benefits,” because it will increase federal deficits and debt.

That centrist position makes CRFB’s analysis of single payer all the more devastating, because one cannot write it off as coming from a right-wing group. And its analysis is devastating, carrying it three main messages, as follows.

Consider some of the options to pay for single payer CRFB examines, along with how they might affect average families.

A 25 percent income surtax. This change would apply to all income above the standard deduction, currently $12,200 for individuals and $24,400 for families.

A 42 percent Value Added Tax (VAT). This change would enact on the federal level the type of sales/consumption tax that many European countries use to support their social programs. Some proposals have called for rebates to some or all households, to reflect the fact that sales taxes raise the cost of living, particularly for poorer families. However, using some of the proceeds of the VAT to provide rebates would likely require an even higher tax rate than the 42 percent CRFB estimates in its report.

Real-Life Cost: According to CRFB, “the first-order effect of this VAT would be to increase the prices of most goods and services by 42 percent.”

Mandatory Public Premiums. This proposal would require all Americans to pay a tax in the form of a “premium” to finance single payer. As it stands now, Americans with employer-sponsored insurance pay an average of $6,015 in premiums for family coverage. (Employers pay an additional $14,561 in premium contributions; most economists argue these funds ultimately come from employees, in the form of lower wages—but workers do not explicitly pay these funds out-of-pocket.)

Real-Life Cost: According to CRFB, “premiums would need to average about $7,500 per capita or $20,000 per household” to fund single payer. Exempting individuals currently on federal health programs (e.g., Medicare and Medicaid) would prevent seniors and the poor from getting hit with these costs, but “would increase the premiums [for everyone else] by over 60 percent to more than $12,000 per individual.”

The report includes other options, including an increase in federal debt to 205 percent of gross domestic product—nearly double its historic record—and a more-than-doubling of individual and corporate income tax rates. The impact of the last is obvious: Take what you paid to the IRS on April 15, or in your regular paycheck, and double it.

In theory, lawmakers could use a combination of these approaches to fund a single-payer health care system, which might blunt their impact somewhat. But the massive amounts of revenue needed gives one the sense that doing so would amount to little more than rearranging deck chairs on a sinking fiscal ship.

Taxing Only the Rich Won’t Pay for Single Payer

Several of the proposals CRFB analyzed would raise tax rates on the wealthiest households above 60 percent. At these rates, economists suggest that individuals would reduce their income and cut back on work, because they do not see the point in generating additional income if government will take 70 (or 80, or 90) cents on every additional dollar earned. While taxing “the rich” might sound publicly appealing, at a certain point it becomes a self-defeating proposition—and several proposals CRFB vetted would meet, or exceed, that point.

The report notes that “most of the [funding] options we present would shrink the economy compared to the current system.” For instance, CRFB quantifies the impact of funding single payer via a payroll tax increase as “the equivalent of a $3,200 reduction in per-person income and would result in a 6.5 percent reduction in hours worked—a 9 million person reduction in full-time equivalent workers in 2030.”

By contrast, deficit financing a single-payer system would minimize its drag on jobs, but “be far more damaging to the economy.” The increase in federal debt “would shrink the size of the economy by roughly 5 percent in 2030—the equivalent of a $4,500 reduction in per person income—and far more in the following years.”

Moreover, these estimates assume a great amount of interest by foreign buyers in continuing to purchase American debt. If the U.S. Treasury cannot find buyers for its bonds, a potential debt crisis could cause the economic damage from single payer to skyrocket.

To say single payer would cause widespread economic disruption would put it mildly. Hopefully, the CRFB report, and others like it, will inspire the American people to reject the progressive left’s march towards socialism.