Big Minimum Wage Hikes Harm Those They Are Intended to Help. Make These Reforms Instead. 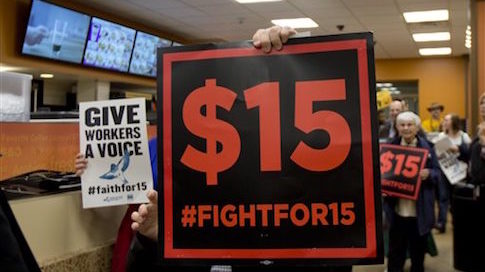 In 2017, Target announced it would raise its minimum wage to $15 an hour by the end of 2020, drawing praise from labor advocates who have called for other retailers to pay their employees a “living wage.”

But the new wage hike isn’t all it cracked up to be. Harry Holzer, in a 2016 Time Magazine article argued that “most minimum wage earners are not poor adults. They are, instead, young people (ages 16 to 24) or second earners in families where a spouse has a higher-wage job. So minimum wage increases help some poor heads of households, but are not well-targeted on them.”

Then there is this. A  new report by CNN BUSINESS, found the big-box retailer has been slashing employees’ hours since the announced wage hike. So have TJMAXX, Marshalls, The Gap and Old Navy, and fast food chains such as Burger King. Nearly half of D.C. employers said they have laid off workers, and reduced hours due to a minimum wage hike

Heidi Shierholz, who was the chief economist at the Labor Department during the Obama Administration, said the wage hike is being counter-attacked by the company slashing employees’ hours, “Most workers aren’t getting any more of what they really need.”

Since the wage increase, Whole Food employees have told reporters that they have experienced widespread cuts that have reduced schedule shifts across many stores, often negating wage gains for employees. Further, companies often move to a nearby city or state to avoid the increase.

And that’s not all. A recent study suggests minimum wage hikes lead to automation replacing low-skill workers’ jobs. In New York City, the rise had people in a panic fearing the loss of other government subsidies, such as section 8 housing due to the added income.

Few would argue that finding a way to create living wages is a bad idea. But the unintended consequences of large raises in the minimum wage are clearly not worth the price. Here is a better way.

We now have a successful, if limited, device to raise wages without interfering in the marketplace. It is the Earned Income Tax Credit (EITC).  It is a refundable tax credit for low- to moderate-income working individuals and couples, particularly those with children. Many states already have state EITC’s, which further expand total income for a household. Critically, the EITC encourages work since the credit is only available to those with earned income.

What needs to be done is to expand the EITC for single and childless couple workers. Also the 2009 changes in the EITC that reduced the marriage penalty and increased the credit for households with three or more children should be made permanent. These changes combined with a refundable child tax credit could be the basis of a broad wage supplement program. Finally, a reform should be instituted so that the EITC comes on a weekly or bi weekly basis, not the following year.

Holzer wrote that “when the minimum wage increases are moderate in size — up to, say, $10 an hour — such employment losses are very small, so the likely tradeoff between higher wage levels and lower employment becomes worthwhile.”

But when the minimum rises so dramatically, we will likely see much larger employment losses among young or low-income workers. The hard truth is that too many of them have too few skills to merit such high wages, at least in the eyes of prospective employers. Some (particularly immigrants) might instead be hired off the books, and paid in cash, while many more will lose employment entirely”.

Proposals such as those suggested by Isabel Sawhill and Quentin Karpilow along with Holzer combine a modest increase in minimum wage with revisions to the EITC.  This may be the best alternative to large increases in the minimum wage.

The tsunami of minimum wage hikes comes from a well intentioned benevolence. Its results have been disastrous for the very people they were intended. A small increase in minimum wage combined with smart revisions to the EITC will benefit low wage earners without marketplace disruption and harm to the working poor.