The Folly of Reentering the Iran Nuclear Deal

Democratic presidential candidates are trying to revive a dead deal 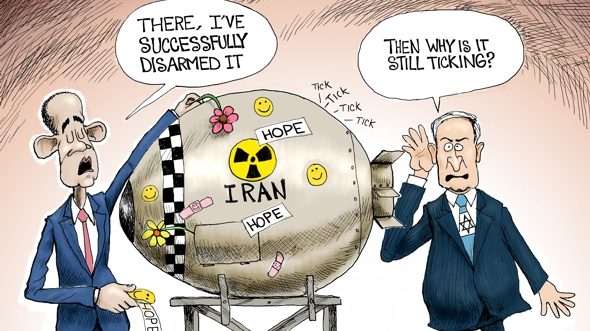 On Monday, the regime in Iran announced that it’s intentionally violating the 2015 nuclear deal. Since then, no Democratic presidential candidates have reversed their pledges to reenter the accord if elected. In other words, several Democratic candidates would prevent Iran from obtaining nuclear weapons by returning to a nuclear agreement that Iran is no longer following. If that strategy sounds illogical, that’s because it is. But that isn’t the worst of it. Recall that, under the deal, the most important restrictions on Iran’s nuclear program begin to disappear at the end of the next presidential term and the beginning of the following one. So, assuming for a moment that a Democrat is elected president in 2020, the tool by which that president would constrain Tehran’s nuclear ambitions—the deal—would effectively expire as they are set to start a second term, or as their predecessor is set to take office, in either case putting the United States in an impotent position to stop an Iranian capability to develop nuclear weapons. And yet, too many Democrats are hell-bent on preserving a nuclear deal that is on its deathbed. At this point, arguments for reviving the narrow nuclear deal in roughly its original form are dangerous and delusional.

The nuclear deal, which President Trump withdrew from last year, allowed Iran to store 300 kilograms of uranium. Iran’s foreign minister, Mohammad Javad Zarif, said Monday that his country exceeded that limit. The International Atomic Energy Agency has since confirmed this violation. The deal also allowed Tehran to enrich its stored uranium to a low concentration of 3.67 percent, a cap the regime also plans to breach in the coming days. “Our next step will be enriching uranium beyond the 3.67 percent allowed under the deal,” Zarif said.

Despite what the media have reported this week, Iran’s latest actions are hardly its first in violation of the nuclear accord. Indeed, Tehran has repeatedly exceeded the limits of heavy water, which is used in nuclear reactors to help produce plutonium, permitted under the deal. The regime has also operated more advanced nuclear centrifuges than are permitted by the accord, while refusing to grant international inspections of nuclear research and military facilities. Furthermore, German intelligence agencies have flagged Iran’s continued illicit attempts to buy nuclear and missile technology. As I explainedin January, Ali Akbar Salehi, the head of the Atomic Energy Organization of Iran, told Iranian media that the regime

circumvented a section of the deal that explicitly requires Tehran to remove the reactor core at its Arak nuclear facility in central Iran, and then to fill its tubes with cement so the facility cannot be used to pursue a plutonium path to a bomb. Iran’s nuclear chief explained that Tehran secretly acquired and stored replacement tubes, noting that only Iran’s supreme leader, Ayatollah Ali Khamenei, knew about the decision. … [Salehi] added that images showing the reactor core filled with cement were “photoshopped.”

Iranian president Hassan Rouhani warned Wednesday that the regime “will restore the Arak reactor to its previous condition.”

We know about Iran’s most significant violation of the deal thanks to the Israelis, who last year captured about 100,000 secret files from Iran concerning its nuclear program. The files revealed, among other insights, that the regime had plans to build at least five nuclear bombs. That the Iranians were hiding such information strongly suggests that they were planning to use it later and still seek nuclear weapons today. Why would a bank robber who promised to quit still have blueprints of banks stashed away in his basement? Recall one of the deal’s first sentences: “Iran reaffirms that under no circumstances will Iran ever seek, develop, or acquire any nuclear weapons.” It seems that Iran was lying from the start, violating the most basic and overarching term of the agreement.

News of Iran’s latest illicit activities came a few days after the first Democratic presidential debates, during which several candidates promised to reenter the nuclear deal if elected.

At the first debate on Wednesday, moderators asked the 10 candidates present whether they would rejoin the deal. Sen. Cory Booker (D., N.J.) was the only one not to raise his hand, although he said he wants to return to a similar agreement. “It was a mistake to pull out of that deal,” he said. Trump “took us out of the deal that gave us transparency into their nuclear program and push back a nuclear breakout 10—20 years. We need to renegotiate and get back into a deal.”

Every Democrat running for president has said or heavily implied that they would reenter the nuclear deal, either before entering the race or during the campaign. Some, such as Colorado governor John Hickenlooper, have added a caveat that they would seek tougher conditions. But the leading candidates have all indicated that they would return to the original agreement.

A few of the candidates have alluded to the fact that, under the deal, the key restrictions on Iran’s nuclear program expire over the next 12 years. Beginning in 2026, Tehran is free to enrich uranium using advanced centrifuges, which make the enrichment process much more efficient, and to install and operate more of its older models. In 2031, restrictions on the amount and level of enriched uranium that Iran can stockpile disappear—restrictions that Iran is already violating. These are the two key dates, after which Iran will be able to build as large of a nuclear program as it wants. And the best part: If the United States were in the deal, Iran could also enjoy relief from sanctions.

But there are several key expiration dates before then. In 2025, for example, the “snapback” provision, under which sanctions by the United Nations would be reimposed should Iran violate the deal, will end. New sanctions would require the U.N. Security Council to pass another resolution, which China or Russia would surely veto. Moreover, in 2023, Iran will have an easier time acquiring components and technology for its ballistic-missile program, the key for Tehran delivering nuclear bombs, with the lifting of a U.N. ban on assisting Iran’s missile program.

Taken together, these dates show that, regardless of who is inaugurated in January 2021, the president will find the nuclear deal unsustainable over the next four years, as key clauses of the deal expire. And if the president during this time foolishly returns to the nuclear deal, imagine the situation they would hand to their successor, who, at that point, would only be able to stop or delay an Iranian nuclear bomb with military strikes. Of course at that point Iran would be better able to defend itself, with the U.N. ban on Iranian arms imports and exports set to expire in 2020 under the deal. Reentering the nuclear accord simply boxes in future presidents, giving them fewer options.

With Iran breaching the deal today and key provisions set to expire in a few years, it simply does not make sense for the United States to return to a dying agreement. Some Democrats at the debate said they wanted to renegotiate their way back into the accord. Well, like it or not, the best way to make that happen, to return to some kind of an agreement, is to follow the Trump administration’s policy: to exert maximum pressure on the regime to force it back into negotiations, with the United States having greater leverage. Other options will lead down a predictably dangerous road of appeasing the Iranians to prevent a full-scale war that won’t erupt if America shows strength and resolve—the opposite of what most Democratic candidates are proposing. So, looking at the big picture, the Democratic candidates can get an agreement. They just have to follow Trump’s road to get there. Don’t hold your breath.