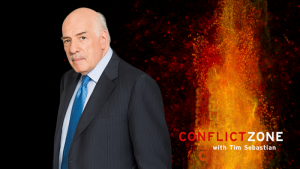 You’re like the surgeon who comes to a patient, the patient dies, and you’re saying, “But it was a great operation! We did a great job!” But the patient died. — Tim Sebastian to International Criminal Court Chief Prosecutor Fatou Bensouda on Conflict Zone

After more than a decade of illiberal folly and imperial impunity, the International Criminal Court’s global media grace period appears to at last be coming to an end.

The sound thrashing Fatou Bensouda receives at the hands of Tim Sebastian for twenty-six unrelenting minutes — embedded for easy access below — should be watched in full by supporters and detractors of the Court alike, but to give you all a quick taste we’ve transcribed the tone-setting first ninety seconds:

Sebastian: Thirteen years of your court’s operation. One billion dollars so far spent. Two convictions. How can anyone say this is worth the money?

Bensouda: Indeed, I would say it is worth the money. It is about the rule of law. it is about..

Bensouda: It is about ensuring there is accountability. It is not really about the number of convictions. It is important of course to have convictions. But what is more important is the impact the Court has had in its infancy.

Sebastian: Okay, but i want to you about the impact it has had. Because [the Court] has stopped none of the global war crimes, the number of which seem to be going up and up. We’ve had Israel/ Palestine, Sudan, Afghanistan, Libya, Syria, Egypt, Ukraine…no deterrent effect whatsoever visible from your Court.

Bensouda: I beg to differ. I think that we should not be judging the court on its performance because atrocities…

Sebastian: What else can we judge it on except on its performance?

It continues on like this — Sebastian asking pointed, yet easily anticipated questions; Bensouda inexplicably having no persuasive retort. Watch the whole remarkable exchange…