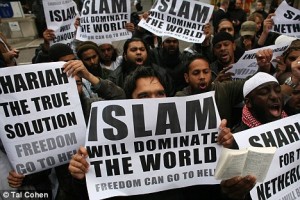 “I saw that report.  It is hilarious to me — He gets it every day, okay?  The president of the United States gets the presidential daily briefing every day. There is a document that he reads every day when he is not — well, he always reads it every day because he’s a voracious consumer of all of his briefing materials.”  — White House Press Secretary Jay Carney on Sept. 10 responding to a question about President Obama attending fewer than half of his daily national security briefings, first reported by Washington Post Columnist Marc Thiessen.

The ongoing unrest in the Muslim world, including riots at multiple diplomatic outposts, chaos in unstable nuclear power Pakistan and attacks on U.S. forces in Afghanistan, is shaping up to be a bigger threat to President Obama’s re-election bid than it first appeared.

The threat to Obama’s chances comes from the decision by him and his administration to declare the anti-American uprisings that began last week on Sept. 11 as spontaneous events triggered by YouTube clips of a unfinished movie that mocks the founder of Islam, Mohammed.

Despite the timing of the attacks on the 9/11 anniversary and the growing influence of Islamists in the two countries where the uprising first began — Libya and Egypt — team Obama was adamant that the problem was a year-old Internet posting.

Susan Rice, Obama’s ambassador to the United Nations, said on “FOX News Sunday with Chris Wallace”  that the attack in Libya, which involved multiple stages and heavy weaponry, “was a spontaneous reaction to what had just transpired in Cairo as a consequence of the video.”

After adamantly refusing suggestions, including from the leaders of the government in Libya, that the attack in that country last week that claimed the lives of the U.S. ambassador and two former Navy SEALs were coordinated and pre-meditated, the Obama administration has now acknowledged the attack as a “terrorist” act.

FOX News colleague Bret Baier was first to report that intelligence officials believe the attack was directly linked to al Qaeda and involved Sufyan Ben Qumu, a former Guantanamo Bay detainee tied to the financiers of the Sept. 11, 2001 attacks on America.

“Spontaneous” it clearly was not. Perhaps terrorists pushed the video to provide a chaotic environment in which to strike in Libya or harass American interests around the globe. But if it hadn’t been this blaspheming of Mohammed, it surely would have been another, like the current turmoil about a cartoon in a French newspaper.

There were apparently two main motivations for Obama to hew to the narrative that the video was the cause of the attacks and that the Libya uprising was spontaneous.

First was ideological. The President and his team share the worldview that within the root cause of anti-American terrorism and aggression is the insensitivity and foreign policy of the United States. While conservatives hold that it is a corrupt ideology that hates American-style freedom and tolerance, liberals hold that American aggression and insensitivity gave rise to understandable grievances among Muslims then exploited by a radical few.

Second was practical politics. One of Obama’s main electoral strong suits has been the absence of any successful major terrorist attacks on his watch. The killing of Usama bin Laden and Obama’s drone “kill list” have been held up left and right as proof that Obama is tough on Islamist terrorists and vigilant.

Allowing any suggestion that his administration was blindsided by a terrorist plot, especially on Sept. 11, would have cut against the preferred narrative for his campaign that Obama is deadly and vigilant.

It was not helpful, then, that one of the stories of the day immediately before the attacks was about how Obama had been eschewing in-person national security briefings, which allow for questions and answers with security officials, in favor of reading documents on his iPad while jetting between campaign events and fundraisers.

Any questions about the prioritization of national security are unwelcome for any administration. Recall the furor over George W. Bush’s vacationing before and after the 2001 attacks. That Obama would be cutting any corners on intelligence while making time for Beyonce, George Clooney and, apparently, a guy dressed like a pirate would undo some of the huge gains he has made in convincing voters that he was a war president.

Add to the iPad flap the growing anxiety about a confrontation between Israel and rogue state Iran over the Iranian nuclear program. The current bind for the president is that the Israeli Prime Minister can’t get a meeting with Obama while he is in the U.S. for a United Nations conclave. Again, the charge from conservatives is that Obama has time for fawning chat-show appearances and fundraisers, but not the key American ally in the Middle East.

The president has been taking his intelligence briefings in person this week and made much of a lengthy phone call he had with Israeli Prime Minister Benjamin Netanyahu, but the red team isn’t relenting — including a new Florida ad from conservative group Secure America Now featuring Netanyahu warning of an imminent attack from Iran.

And while the political press hyperventilated over Republican nominee Mitt Romney’s response to the initial uprising as being too sharp and too political, the accusation that Obama is an apologist for America who emboldens our enemies is far more damaging when voters see images of American flags burning around the globe.

Ideology and political advantage seem to have driven team Obama to stake out an untenable position on the current troubles. In the days to come, the president will have to forgo the former and focus on politics alone as he seeks to put forward a tougher, more attuned and less apologetic-sounding foreign policy pose.