Freedom Centers Defending Freedom On Muslim Uprising, Obama says its a Bump in the R ...

On Muslim Uprising, Obama says its a Bump in the Road 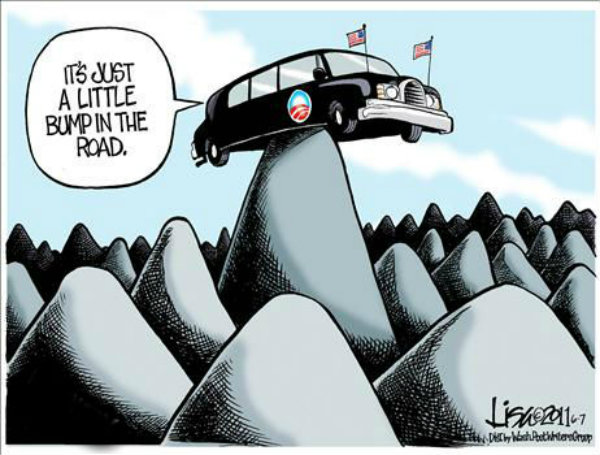 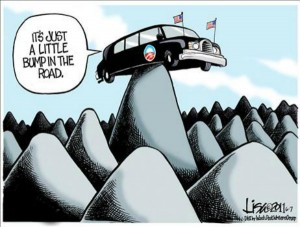 “But I was pretty certain and continue to be pretty certain that there are going to be bumps in the road because, you know, in a lot of these places the one organizing principle has been Islam.” — President Obama in an interview with 60 Minutes.

President Obama is asking voters to take the prospect of economic recovery on faith: That the weak indicators of restoration are early signs of a more robust revival in the near future. The bad indicators, meanwhile, are just “bumps in the road.”

Whenever the unemployment picture darkens or the economy falters, voters are likely to hear the president or one of his advisers talk about “bumps in the road.”

Now, the president is applying the same metaphor to the deteriorating international situation, leading to the unforced error of calling the Middle East and North Africa unrest — which has included everything from the recent attack on the consulate in Libya to violent protests —  as “bumps in the road.”

The campaign of Republican nominee Mitt Romney is pouncing on that gaffe, made in an interview on “60 Minutes” just as Republicans have for years been blasting the president for calling tens of millions of Americans being unemployed, underemployed or having given up looking for work as “bumps in the road.”

The situation is made worse because Obama’s interview aired just two days after CNN went public with passages from the slain ambassador’s diary that show he was in increasing fear of attack but did not receive additional security in the unstable, Islamist nation.

While the State Department is ripping the network for reporting on the contents of the journal despite promising the family of the slain diplomat that it would not on the grounds of respect for the dead and mourning, there’s no doubt that the candid warnings of the rise of Islamic radicals also bolster Republican claims that the administration was caught napping at a time of massive unrest and on the anniversary of 9/11.

The American situation in Muslim nations hasn’t been so precarious in a long time.

Al Qaeda, reeling from years of targeted attacks, has reasserted itself with a vengeance with the successful attack in Libya. Our troops in Afghanistan are under constant threat from the very people they are supposed to be equipping to hold that nation together. Islamists are on the march across the globe and turning what were once dubious allies into potential enemies.

As ultimatums rose from the Islamist/militarist government in Cairo and rioters laid siege to the U.S. consulate in Islamabad, the Obama administration was struggling to sort out its story line.

“Spontaneous” vanished as the word to explain the attack in Libya, giving way to “self-evident.” Over the course of more than a week, the president and his team shifted from talking about rioters incited by a YouTube clip that blasphemed the founder of Islam, Mohammed, to suggesting that bad guys were exploiting the video to put the West on the defensive.

It was a gradual walk back and an effort to avoid the damning Republican claim that the president, for all his kill lists and the snuffing of Usama bin Laden, was more focused on his re-election than national security.

The president is downplaying the disturbing trend in the Middle East, a region he says is headed for democratic enlightenment, as a bump in the road to eventual peace and stability. His policies of encouraging the Islamist governments that toppled reliable but authoritarian U.S. allies in the region look very much in doubt right now, but the president is trying to express cool confidence.

Obama’s intent is to say that this was expected and all part of a larger, more complex strategy that takes a longer, more nuanced view of the region. The message on the Muslim uprisings, as it is on the economy: “It’s cool. We’ve got this under control.”

But as with the domestic “bumps” the foreign policy “bump,” tends to make the president look inadequately alarmed about a problem that looks very real and very alarming to voters who watch their flag burning around the world and see the bloody handprints on the pillars in Benghazi.

Obama’s chief advantage in this is that Republicans and Romney remain tentative on foreign policy in the long shadow of the Iraq war. The party remains divided between interventionists and non-interventionists and many of the top policy makers in the GOP aren’t politically palatable because of their role in planning or executing the Iraq endeavor.

Romney has to be careful not to open himself too much to the president’s charge that he would start shipping troops over to the worst neighborhood in the world at a time when voters are desperate to see such interventions at an end.

But, the president’s effort to appear blasé about the crisis have certainly given Romney an opening to press his claim that Obama is primarily concerned about his own re-election.

Chris Stirewalt is digital politics editor for Fox News and this article was published at FoxNews.com on Sept. 24, 2012.