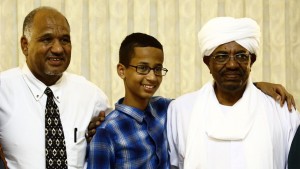 The International Criminal Court isn’t having a great year when it comes to enticing member or non-member states to take it seriously.

First, Rome Statute signatory South Africa, for a series of actually not-so-simple reasons, allows Sudanese President Omar Hassan al-Bashir to attend a June meeting of the African Union unmolested despite the international warrant out for his arrest, then ignores the ICC’s demands for an official explanation, then, when pressed, essentially says, “Thanks, but no thanks — we’ll just pull out of the Court.”

In the middle of this swirling controversy, non-member state China invites al-Bashir to the Great Hall of the People where Chinese President Xi Jinping — undaunted by headlines such as, “US Warns China Over Bashir Trip” — tells al- Bashir, “You are an old friend of the Chinese people. China and Sudan are like two brothers that are also good friends and partners. Mr Bashir coming to China shows our partnership is strong”(!)

And now, perhaps the greatest indignity of all: The ICC indictment has failed to deter (in addition to, you know, genocide) the much-heralded teenage clockmaker Ahmed Mohamed — whose own brief arrest after his clock was mistaken for a bomb became a social media rallying point– from smiling ear-to-ear during an al-Bashir meet-and-greet…A confab that came mere days before Mohamed huddled at the White House with Barack Obama for “Astronomy night.”

Of course, Mohamed, so far as we know, has not signed the Rome Statute and therefore was under no obligation to himself arrest al-Bashir. Still, something tells us the Obama Administration won’t be hectoring the kid via Twitter the way they did South Africa.

Cool clock, Ahmed. Want to bring it to the White House? We should inspire more kids like you to like science. It’s what makes America great.