Obama at odds with Founders 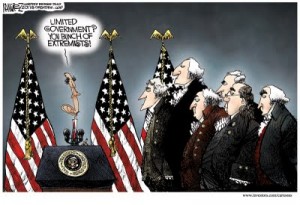 On Nov. 6, Americans will vote in an election whose importance rivals that of the election of 1912 — 100 years ago. That election, which put Woodrow Wilson in the White House, ushered in the progressive movement, of which President Obama is the heir and today’s leader.

Progressivism views the roles of citizen and state very differently than our founding fathers did. The founders anchored the Declaration of Independence and the Constitution in three principles. They believed that human rights to life, liberty and the pursuit of happiness are inherent in nature and human dignity, and preexist the state. They believed that government should be limited, and that its primary purpose is to protect these rights. Finally, they crafted our Constitution to disperse power and curb its abuse through mechanisms such as checks and balances, and federalism.

As the 20th century opened, progressives like Woodrow Wilson — a former president of Princeton University — dismissed the Declaration and Constitution as outmoded. They insisted that America’s archaic political system was unsuited to solving the problems of a new industrial age. Ironically, however, they drew their own vision for perfecting democracy from a very undemocratic place: the imperial Germany of Chancellor Otto von Bismarck.

American intellectuals encountered Germany in the 1870s and 1880s, when thousands of them flocked there to study the new “social sciences” at its universities. Many were dazzled by what they saw as the world’s most advanced and efficient nation, and by the top-down social welfare system Bismarck was building.

They were captivated, too, by the philosophy of Georg W.F. Hegel — a German thinker whose “historical idealism” undergirded the Prussian state. Hegel’s vision of man and the state ran directly counter to the American founders’ classical liberalism. He did not view human rights as inherent in nature, universal, and existing prior to the state. Instead, he maintained that rights “evolve” historically and take different forms at different times and places. The state, in his view, is both the source of rights and the engine of historical progress.

Wilson, like many intellectuals of his generation, was besotted by the progressive vision. He scoffed at Americans’ “blind worship” of their Constitution and the limits it placed on government power. And he was impatient with checks and balances, which he viewed as an irrational obstacle to the policy changes that progress demanded.

He sought to replace our nation’s “limited” Constitution with a “living” Constitution that would “evolve” — under the guidance of far-seeing intellectuals like himself — to tackle the nation’s changing problems. “No living thing can have its organs offset against each other as checks, and live,” he wrote.

Presidents Franklin Roosevelt and Lyndon Johnson took up the progressive standard after Wilson passed from the scene. Now Obama is leading the movement’s fourth wave, as political scientist Charles Kesler explains in his new book, “I am the Change: Barack Obama and the Crisis of Liberalism.

Obama’s “Hope and Change” campaign sprang from the progressive faith that change is inevitably good when led by well-intended visionaries like himself. As president, he announced he would “fundamentally transform” America. On his watch, our “living” Constitution has become ever more incapable of placing limits on the size and role of government. Impatient of the limits on his power that remain, the president has frequently sidestepped Congress through regulatory actions and executive orders.

Yet even if Obama wins this election, progressivism’s days may be numbered. As Kesler points out, the economic and moral sustainability of the welfare state grows more and more doubtful. We are seeing the beginning of its slow collapse in Europe. Obamacare, says Kesler, is “exhibit A in the case for the intellectual obsolescence” of progressivism.

The American people want government to protect their rights to life, liberty and the pursuit of happiness. But they know that government endangers liberty when it assumes the power to try to guarantee happiness itself.

Katherine Kersten is a senior fellow at the Center of the American Experiment. This article was published October 20, 2012 in the StarTribune.