Obama Comes to New York for Barbara Walters and, sorta, the UN 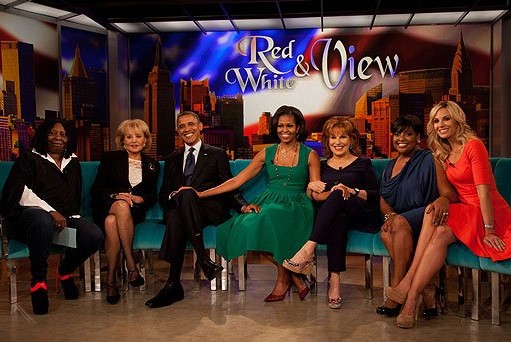 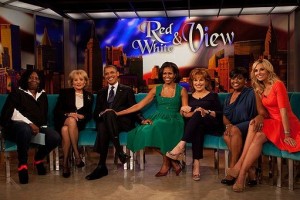 Though Gotham is full of visiting heads of government and state, the President is meeting no one this time around. Is it insurance against possible gaffes? Or just a broader excuse not to meet the Prime Minister of Israel?

On Monday, President Barack Obama made his fourth pilgrimage to New York City for the opening of the United Nations General Assembly. He arrived in Manhattan on a glorious autumn afternoon and rushed to his first – and only – public event of the day: a taping of ABC’s The View with his wife, Michelle.

Obama’s lack of any scheduled bilateral meetings with world leaders at the summit – last year, as ABC’s Mark Knoller pointed out, he had 13 such tête-à-têtes — was the subject of some contention at the White House briefing just before the President left. “I have no meetings to announce to you…,” White House Press Secretary Jay Carney said. “I mean, the President’s schedule includes the reception this evening. It includes his speech tomorrow [before the 67th General Assembly]. Beyond that I don’t have details for you. But again, I think it’s fairly clear, based on the President’s engagement with foreign leaders just in the last several weeks, that he is intensively engaged in matters of national security and foreign policy as he has been throughout his presidency.”

Of course, meeting with world leaders when you don’t know if you’ll still have your job in the next few weeks, can be potentially awkward. It can lead to unfortunate hot-mic gaffes, of which Obama has not been immune (for example, in Seoul earlier this year he asked Russian President Dmitry Medvedev to be flexible on missile defense until after the election, when Obama would have more space to maneuver–too much diplomatic candor for the sensitive electoral season). Still, ignoring the opportunity to meet one-on-one with world leaders underlined where Obama’s attention is fixed: the campaign. And it was the election that dominated the taping of The View. That, and the inside skinny of the Obama family’s schedule.

Who can provoke Obama the most? Michelle, he said, “by being thoroughly unreasonable.” Who’s funnier? “I am,” said Michelle. What do they discuss at dinner? Their days. Dad goes last and the girls rarely want to hear more than five minutes from him. Who tucks whom in? Mom and/or dad tuck in the girls every night, though with Malia turning into a night owl like her dad these days. Obama tucks Michelle in at 10 p.m. and then stays up till 1 a.m. “There’s a lot of tucking in our family,” laughed Michelle. How has the White House been on their relationship? Actually, it’s strengthened it since Obama now lives “above the shop” instead of commuting from city to city. What will they do for their 20th anniversary on Oct. 3? Probably dinner the Saturday before since their anniversary falls on the first debate. What do they want to do when they leave office? Michelle: relive their honeymoon driving the California coast. Obama: “What I’d enjoy most is spending time with kids. I love teaching. I’m not sure it’ll be in a classroom, but I love the idea of being able to go around to cities and do mentorships.”

But “first things first,” Obama said. “I’ve got a second term putting people back to work, making sure our schools are up to snuff, wrapping up another war.” On that note Obama drew a sharp contrast between himself and his opponent, Republican presidential nominee Mitt Romney. When asked by Barbara Walters what would be so bad about a Romney presidency, Obama cited Romney’s response to a question posed by 60 Minutes on Sunday about whether it’s fair that Romney pays a lower tax rate than someone making $50,000 a year. Romney, Obama recalled, “said, ‘Yes, I think it’s fair and I also think that’s the way you get economic growth,’ the notion being that people at the top, they’ll invest and they’ll create jobs. I just have a different vision about how we grow an economy. I think, Barbara, that you grow an economy from the middle out, not from the top down.”

Obama didn’t completely escape foreign policy. When asked about the attack in Libya last week that claimed the life of U.S. Ambassador to Libya Chris Stevens, Obama said the attack “wasn’t just a mob action,” contradicting initial assertions by his Administration that the assault hadn’t been premeditated. Obama also said that in the wake of the incident his government was paying closer attention to “fringe” groups of extremists, in addition to al-Qaeda and more established terrorist groups. Finally, he spoke about how the toughest day thus far in his presidency: last August when a helicopter crash claimed the lives of 30 servicemen, including many Navy Seals. “So I flew up to Dover to see the caskets come down and to be with the families,” Obama said. “And, you know, it’s very raw in those moments and it reminds you that freedom’s not free.”

Jay Newton-Small’s aritcle was originally published in Time on Sept. 24, 2012.