By Alex Swoyer and Gabriella Muñoz • The Washington Times 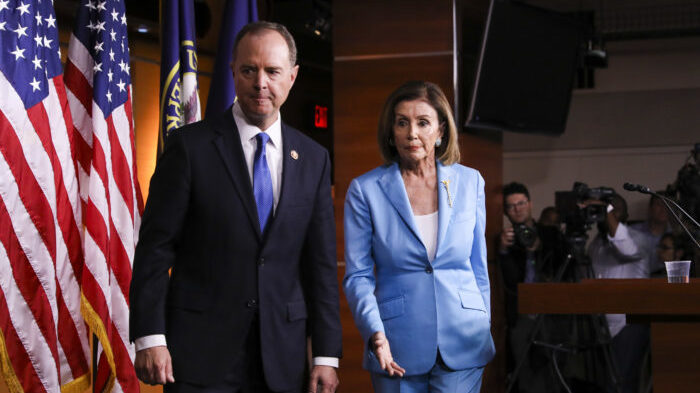 House Speaker Nancy Pelosi’s threat to withhold impeachment articles from the Senate upended the procedures spelled out in the Constitution and threw Capitol Hill into deeper partisan turmoil Thursday.

Republicans balked that the speaker was “afraid” of a Senate trial that is all but assured to acquit President Trump and potentially discredit the House’s party-line impeachment vote.

“The prosecutors are getting cold feet in front of the entire country and second-guessing whether they even want to go to trial,” quipped Senate Majority Leader Mitch McConnell, Kentucky Republican.

The day after Mrs. Pelosi’s Democrats impeached Mr. Trump on two counts — the first impeachment in U.S. history to have no bipartisan support — she cut off reporters’ impeachment questions at her weekly press conference.

She then explained that she did not know when the House would take the next steps in the process of sending the two impeachment articles to the Senate, where the Constitution dictates the impeached president will stand trial and face removal from office.

The Constitution requires that the Senate “shall have the sole power to try all impeachments.”

And yet Mrs. Pelosi said the House would not name the impeachment managers who argue the case in the Senate or send the articles over until she was satisfied that the Republican-run upper chamber would conduct what she called “a fair trial.”

Asked about Republican complaints that she was “playing games” with impeachment, Mrs. Pelosibecome adamant.

“I was not prepared to put the managers in that bill yet because we don’t know the arena that we are in. Frankly, I don’t care what the Republicans say,” she told the gathering of reporters before refusing any further impeachment questions.

Other House Democrats, including members of the leadership team, said they were prepared to delay indefinitely the articles of impeachment until Mr. McConnell provided the assurances they want on the trial.

“We would be crazy to walk in there knowing he set up a kangaroo court,” House Majority Whip James E. Clyburn, South Carolina Democrat, told CNN.

Claire Finkelstein, a law professor at the University of Pennsylvania, suggested the House could continue to gather evidence while withholding the articles.

However, the Justice Department immediately filed a court brief arguing that Democrats’ legal battle to compel testimony from Mr. McGahn should be tossed out now that Mr. Trump has been impeached.

In his Senate floor speech, Mr. McConnell appeared to call the speaker’s bluff.

“They said impeachment was so urgent that it could not even wait for due process but now they’re content to sit on their hands. It is comical,” he said on the chamber floor.

Mr. Trump weighed in by saying Mrs. Pelosi’s gamesmanship was bad for the country.

“Pelosi feels her phony impeachment HOAX is so pathetic she is afraid to present it to the Senate, which can set a date and put this whole SCAM into default if they refuse to show up! The Do Nothings are so bad for our Country!” the president tweeted.

The impeachment stemmed from Mr. Trump asking Ukraine for “a favor” in investigating former Vice President Joseph R. Biden and his son Hunter, who is linked to Ukraine energy company in that graft-riddled country.

Mr. Trump is accused of withholding $391 million in military aid from Ukraine and a prized White House visit for the Ukrainian president as leverage to get the investigation announced.

It was unclear how, or even whether, a delay would pressure the Senate to adopt Democrat-friendly procedures for a trial. The move also appeared to run afoul of the Constitution, effectively nullifying the House impeachment vote.

“Her threat to the Senate is: Do exactly what I want or I’m not going to impeach the president, I’m not going to send over the impeachment articles,” he told Fox News. “My attitude is, ‘OK, throw us in that brier patch. Don’t send them. That’s all right. We actually have work to do.’”

Mr. McConnell said the Democrat-run House produced a “shoddy” impeachment work product, rushed through a 12-week impeachment inquiry and refused to go to court to enforce subpoenas for White House documents and testimony by administration officials.

He noted that the impeachment investigations into President Richard Nixon and President Bill Clinton both lasted more than a year.

“Democrats’ own actions concede that their allegations are unproven,” he said.

Mrs. Pelosi insisted that she is not intimidated and blamed the delay on the Senate’s inability to agree to terms of a trial.

Mr. McConnell and Senate Minority Leader Charles E. Schumer, New York Democrat, met Thursday to begin negotiating the rules and procedures for the hearing. They were not expected to nail down the details beyond setting a possible start date, but the two men did not get that far and remain at an impasse.

Mr. Schumer has demanded live testimony from witnesses during the trial, saying more evidence should be presented. Republicans refused, saying the standard set in the impeachment trial against Mr. Clinton should be applied to Mr. Trump.

In 1998, the two sides agreed to hear from the House impeachment managers and then from the president’s legal team before deciding whether to call witnesses. Mr. McConnell said the process worked for the Democrats back then, and it should work for Mr. Trump, too.

Josh Blackman, a professor at South Texas College of Law, said there is no requirement as to when the House must transmit the articles of impeachment to the Senate.

“There is no obligation to actually transmit the articles. She would do this to indefinitely wound Trump, and avoid a trial the [Democrats] will lose,” Mr. Blackman said.