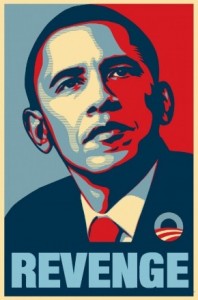 And of course, four years ago, it was Obama the optimist. He was the candidate of hope and change. But he has run such a negative campaign in 2012, right up to the end, that I believe his negativism is translating into pessimism. And that’s not what the beleaguered American people want.

“Voting is the best revenge,” Obama infamously said this past weekend. What did he mean by that? F. Scott Fitzgerald’s line was, “Living well is the best revenge.” But with President Obama, what exactly is this revenge? Revenge against whom? Against what?

The Joint Economic Committee reports that both economic growth and job creation are the worst in modern times, dating back to 1947. So is it revenge for Mr. Obama because he hasn’t had the chance to create even higher spending, taxes, and regulation?

In his closing argument in the Wall Street Journal this weekend, Obama went on several times about raising taxes on individuals and businesses. This is pessimism. You know why? Because optimists believe in the ingenuity, entrepreneurship, and spirit of gifted individuals who are free to use their God-given talents to make our economy and society the best it can be. Not government. That’s the pessimistic view. But individual initiative — the optimistic view.

Mitt Romney takes this individual view. God granted natural rights to individuals, and it is they who truly run the government and the country. That’s the Romney view. It’s the free-enterprise view. The market view. The human-action view. To my way of thinking, that makes Romney the model optimist.

Look at Romney’s general plan. He sets optimistic goals of 4 percent growth and 12 million new jobs. He will reduce and reform the tax system in ways that will reward, not punish, the success of individuals and companies. He would encourage business, not insult it. He believes free-market capitalism and choice, not the heavy hand of government, are the best solutions to poverty.

When Romney talks about increasing take-home pay, he’s creating a dividing line between a larger private sector and a more restrained government sector. This goes hand in hand with his goal to contain government at 20 percent of GDP. This, too, is optimism.

Even more, when Romney offers to reach across the aisle to find common ground on major issues — like spending, deficits, debt, tax reform, and entitlement reform — he is in effect showing an inherent optimism that well-meaning men and women can get things done in order to make the country better.

In effect, just as Reagan did in the crisis of 1980, Romney is saying: We can fix this and solve this with people of good will and strong principles coming together for the first time in many years.

I am not blaming Barack Obama for all the country’s ills. He was dealt a very bad hand. But he chose the wrong course. He relies too much on big government and too little on the enterprise of ordinary people. He is operating a historically discredited model.

Mitt Romney, on the other hand, is working to restore the freedom model created by our Founders. This model has served the country well for 250-some-odd years. It is fundamentally a belief in people and good common sense. It is profoundly optimistic.

Perhaps I’ll be wrong. But I think optimism wins this election.

Lawrence Kudlow is host of CNBC’s The Kudlow Report and co-host of The Call. He is also a former Reagan economic advisor and a syndicated columnist.