Tag Archives: Freedom of the Press

The media has by and large given President Obama’s failed Afghanistan policy a pass—just as it has his larger foreign policy missteps. 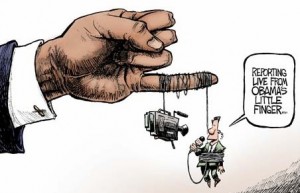 Once again, be very glad we don’t have a Republican president right now. If we did, we would be treated to a merciless media pounding, night-and-day, on the series of strategic failures, mistakes and false starts that have characterized America’s war strategy in Afghanistan since 2009. We’d be getting constant reminders of how the President, who repeatedly said that this was a just war that America had to win, and who told us that we should vote for him because he wouldn’t let anything distract him from the vital task of winning said war, hasn’t managed to win it, or even end it, after six long years. END_OF_DOCUMENT_TOKEN_TO_BE_REPLACED 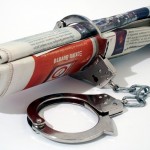 In a letter to President Obama, the 38, led by the Society of Professional Journalists, said efforts by government officials to stifle or block coverage has grown for years and reached a high-point under his administration despite Obama’s 2008 campaign promise to provide transparency. END_OF_DOCUMENT_TOKEN_TO_BE_REPLACED

Abridging freedom of the press

Gary Pruitt, the president and CEO of the Associated Press, used those words on CBS’s Face the Nation to describe the Justice Department’s seizure of two months of AP reporters’ phone records in New York, Washington, and Hartford, Conn. As Attorney General Eric Holder said in an entirely different context, that’s not hyperbole.

Original reports on the subpoena indicated it called for the capture of phone logs of reporters’ office phones, cell phones, and home phones. The subpoena did not allow the Justice Department to obtain the contents of the phone calls, merely the logged numbers. That’s cold comfort to any reporter who knows that phone numbers are a source’s fingerprints and access to them can give the government an evidentiary trail to a suspected leaker. END_OF_DOCUMENT_TOKEN_TO_BE_REPLACED