Sensitive documents found amid the wreckage of the U.S. consulate shine new light on the Sept. 11 assault that killed Ambassador Chris Stevens and three other Americans. 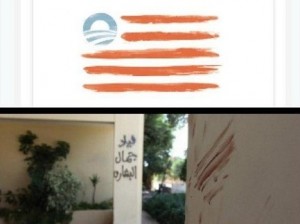 BENGHAZI, Libya — More than six weeks after the shocking assault on the U.S. consulate in Benghazi — and nearly a month after an FBI team arrived to collect evidence about the attack – the battle-scarred, fire-damaged compound where Ambassador Chris Stevens and another Foreign Service officer lost their lives on Sept. 11 still holds sensitive documents and other relics of that traumatic final day, including drafts of two letters worrying that the compound was under “troubling” surveillance and complaining that the Libyan government failed to fulfill requests for additional security.

When we visited on Oct. 26 to prepare a story for Dubai based Al Aan TV, we found not only Stevens’s personal copy of the Aug. 6 New Yorker, lying on remnants of the bed in the safe room where Stevens spent his final hours, but several ash-strewn documents beneath rubble in the looted Tactical Operations Center, one of the four main buildings of the partially destroyed compound. Some of the documents — such as an email from Stevens to his political officer in Benghazi and a flight itinerary sent to Sean Smith, a U.S. diplomat slain in the attack — are clearly marked as State Department correspondence. Others are unsigned printouts of messages to local and national Libyan authorities. The two unsigned draft letters are both dated Sept. 11 and express strong fears about the security situation at the compound on what would turn out to be a tragic day. They also indicate that Stevens and his team had officially requested additional security at the Benghazi compound for his visit — and that they apparently did not feel it was being provided.

One letter, written on Sept. 11 and addressed to Mohamed Obeidi, the head of the Libyan Ministry of Foreign Affairs’ office in Benghazi, reads:

“Finally, early this morning at 0643, September 11, 2012, one of our diligent guards made a troubling report. Near our main gate, a member of the police force was seen in the upper level of a building across from our compound. It is reported that this person was photographing the inside of the U.S. special mission and furthermore that this person was part of the police unit sent to protect the mission. The police car stationed where this event occurred was number 322.”

The account accords with a message written by Smith, the IT officer who was killed in the assault, on a gaming forum on Sept. 11. “Assuming we don’t die tonight. We saw one of our ‘police’ that guard the compound taking pictures,” he wrote hours before the assault.

The State Department declined to comment directly on the documents, citing an ongoing investigation. “An independent board is conducting a thorough review of the assault on our post in Benghazi,” deputy spokesman Mark Toner said. “Once we have the board’s comprehensive account of what happened, findings and recommendations, we can fully address these matters.”

Obeidi, the Libyan official named on one of the printouts, said he had not received any such letter, adding, “I did not even know that the U.S. ambassador was visiting Benghazi.” However, a spokesman for the Benghazi police confirmed that the ministry had notified the police of the ambassador’s visit. “We did not receive that letter from the U.S. consulate. We received a letter from Ministry of Foreign Affairs Benghazi asking for additional security measures around consulate during visit of the ambassador. And the police provided all extra security which was asked for,” the spokesman said.

It is not clear whether the U.S. letters were ever sent, and if so, what action was taken before the assault on the evening of Sept. 11. But they speak to a dangerous and uncertain security environment in Benghazi that clearly had many State Department officials worried for their safety.

Since the fall of Muammar al-Qaddafi’s regime, the country’s powerful militias have often run roughshod over the police and national army — and often coopted these institutions for their own purposes. U.S. officials were certainly well aware of the sway that various militias held over Benghazi, given that the consulate’s external security was supposed to be provided by the Islamist-leaning February 17 brigade.

What exactly happened that night is still a mystery. Libyans have pointed fingers at Ansar al-Sharia, a hard-line Islamist group with al Qaeda sympathies, if not ties. Ansar al-Sharia has denied involvement, but some of its members were spotted at the consulate.

The document also suggests that the U.S. consulate had asked Libyan authorities on Sept. 9 for extra security measures in preparation for Stevens’ visit, but that the Libyans had failed to provide promised support.

“On Sunday, September 9, 2012, the U.S. mission requested additional police support at our compound for the duration of U.S. ambassador Chris Stevens’ visit. We requested daily, twenty-four hour police protection at the front and rear of the U.S. mission as well as a roving patrol. In addition we requested the services of a police explosive detection dog,” the letter reads.

“We were given assurances from the highest authorities in the Ministry of Foreign Affairs that all due support would be provided for Ambassador Stevens’ visit to Benghazi. However, we are saddened to report that we have only received an occasional police presence at our main gate. Many hours pass when we have no police support at all.”

The letter concludes with a request to the Libyan Ministry of Foreign Affairs to look into the incident of the policeman conducting surveillance, and the absence of requested security measures. “We submit this report to you with the hopes that an official inquiry can be made into this incident and that the U.S. Mission may receive the requested police support,” the letter reads.

A number of other documents were found on the floor inside the TOC building. They are partly covered with ash, but legible.

A second letter is addressed to Benghazi’s police chief and also concerns the police surveillance of the U.S. consulate on the morning of Sept. 11. The letter also requests an investigation of the incident, and states that the consulate “takes this opportunity to renew to the Benghazi Police the assurances of its highest consideration and hopes for increased cooperation.” Benghazi’s head of police, Brigadier Hussain Abu Hmeidah, was fired by the government in Tripoli one week after the consulate attack. However, Abu Hmeidah refused to step down and is still serving as the head of police. He is currently on sick leave, according to his office manager, Captain Seraj Eddine al-Sheikhi, and was unavailable for comment.

The man who officially was appointed to succeed Abu Hmeidah as Benghazi’s police chief, Salah Doghman, said in a Sept 19 interview with Reuters: “This is a mess …When you go to the police headquarters, you will find there no police. The people in charge are not at their desks. They have refused to let me take up my job.”

The concerns about police surveillance exhibited in the letters to the Ministry of Foreign Affairs and the Benghazi police chief cast further doubt on early reports that a spontaneous protest was to blame for the attack on the U.S. consulate — reports that the State Department has disavowed. They also appear to contradict an Oct. 9 State Department briefing on the consulate attack, during which a senior State Department official claimed that there had been no security incidents at the consulate that day. “Everything is calm at 8:30 p.m,” the official said. “There’s nothing unusual. There has been nothing unusual during the day at all outside.”

These letters were found a month and a half after the attack, despite a visit to the compound by FBI investigators. Other documents found at the TOC building include a printout of an unclassified Sept. 9 email between Stevens and David McFarland, the head of the U.S. Embassy’s political and economic section, inquiring about meetings for the ambassador’s upcoming visit; telephone numbers and names of embassy staff; and a hotel bill from Stevens’ 2011 stay at the Tibesti Hotel in Benghazi.

The continued threat to U.S. personnel in Benghazi may be the reason these documents escaped the FBI’s attention. With suspected militants still roaming the streets, FBI investigators only had limited time to check the consulate compound. According to a Benghazi resident who resides near the consulate, the FBI team spent only three hours examining the compound.

The FBI declined to comment, citing the ongoing investigation.

During their short visit, FBI agents apparently mapped the compound by gluing small pieces of yellow paper with different letters on it next to each room in the TOC building. Next to the room where the letters and most documents were found, a yellow paper marks it room “D.” Above the paper, somebody has carved a swastika in the blackened wall.

Villa C, which was used as Stevens’ residence during his stay in Benghazi, is located 50 meters from the TOC building. Here, an open window leads to the safe haven — a sealed-off part of Villa C where Stevens and Smith suffocated to death. On the destroyed bed lay the Aug. 6, 2012, copy of the New Yorker. The magazine’s cover carries a label with Stevens’s name and his diplomatic mailing address.

A few meters to the right is the safe haven’s bathroom. Everything here is blackened by smoke. One of the two white toilets is covered with bloodstains. On the mirror in the bathroom, an unknown person has written a macabre text in a thin layer of ash. “I am Chris from the dead,” it reads.

Harald Doornbos is a journalist based in Islamabad, Pakistan, covering the greater Middle East. Jenan Moussa is the roving reporter for Dubai based Arabic Al Aan TV.