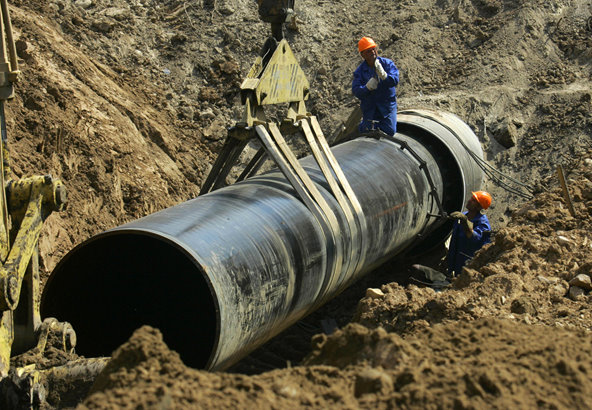 The Keystone XL pipeline is our best bet for a secure energy future.

A decision handed down Friday by the Nebraska Supreme Court allows the permitting process for the Keystone XL pipeline to move forward.

It’s long overdue. The pipeline is a needed addition to the U.S. energy infrastructure that will do much to help America reduce its dependence on energy sources produced in politically volatile regions of the world. In the interim, its construction will lead to the creation of thousands of new jobs in vital industries, the kind some politicians like to call “good jobs and good wages.”

Congressional Republicans have been pushing for the pipeline to go forward over the soft objections of the Obama White House, which finds itself caught between its union supporters on the one hand – who want for their members the jobs the pipeline’s construction will produce – and the environmentalists and green energy entrepreneurs (read: campaign donors) who think it will only add to what they imagine is a global climate problem.

The Nebraska court’s decision may throw all that off. As Capital Alpha Partners, a Washington-based political intelligence firm put it shortly after the ruling came down, letting the Keystone XL pipeline permitting stand “allows President Obama to restart the State Department process in Washington and could result in the permit arriving on the President’s desk for a final decision in a matter of months.”

Obama, of course, has threatened to veto the legislation, which the House passed Friday by a vote of 266 to 153. “We think the decision,” the firm said, “will tend to undermine the upcoming Senate debate and make it less certain that the Hoeven-Manchin bill to permit the pipeline by Act of Congress and forestall legal challenges to related permitting decisions will reach the 60 votes needed for cloture.”

South Dakota’s John Thune, the Senate’s No. 3 Republican, said Friday in a statement, “The president’s litany of excuses for delaying the Keystone XL pipeline has hit yet another dead end. This court decision further erodes the president’s obstruction of the bipartisan, job-creating Keystone XL. Soon the president will have a clear opportunity to sign a bipartisan bill into law approving the construction of this common-sense infrastructure project.” Thune continued: “The president is out of excuses, and it is time for him to act. Will he stand for the American people, or will he continue to stand for his far-left liberal allies?”

As political theater this is all well and good; the question the politicians need to start asking is whether, at a time when the price of gasoline averages $2 at the pump, it’s still needed?

Remember the original purpose of Keystone XL was to link the output from the Canadian tar sands – which is very expensive to produce – to refineries on the U.S. gulf coast. It doesn’t make much sense to continue, as some are starting arguing, if it costs more to produce it than it can be sold for at the end of the production stream.

“Prices are dropping,” argued Mark Maddox, a former senior official at the U.S. Energy Department and a senior fellow at the American Action Forum, “because the OPEC has decided to continue pumping crude out of the ground despite oversupply in the marketplace.”

Writing in The Hill, Maddox explained that the oversupply results from “U.S. oil shale production, which has added 3 million barrels of oil a day” to the marketplace and reduced the need for America to rely on Saudi Arabia’s output. All this is happening, however, in an environment where the global demand for energy is down because the global economy is not growing.

As soon as things start to heat up, the price of energy is bound to increase. And if we don’t have the Keystone XL pipeline then, we’ll wish we did. The U.S. is the world’s new swing oil producer, able to affect the market price of crude by growing or slowing production. In times of global shortage, America will be able to respond the way the Saudis once did – meaning petrodollars will be flowing into U.S. coffers rather than out.

At the end of the day we need more capacity in the U.S., which includes the ability to move crude to refineries in the most efficient way. That means Keystone XL is our best bet for a secure energy future.