The non-partisan Pew Center on the States found one in eight voter registrations were invalid or contained major errors. Some 2.8 million people were registered in two or more states, and 1.8 million registered voters are dead. 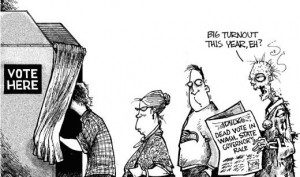 Patrick Moran claims he was just joking about encouraging voter fraud. But he nonetheless resigned last week as field director for the campaign of his father, Virginia Congressman Jim Moran.

Guerrilla videographer James O’Keefe caught Patrick Moran on tape offering advice on how to commit in-person voter fraud. The scheme involved forging utility bills that would satisfy Virginia’s non-photo ID law, and then casting ballots in the name of others — relying on the help of Democratic lawyers stationed at the polls if there were any problems. Some joke.

Last April, a 22-year-old O’Keefe associate showed how easy it is to vote in someone else’s name if no ID is required by being offered the ballot of Attorney General Eric Holder simply by mentioning his name to a Washington, D.C. poll worker. Now O’Keefe has shown just how easy it is to commit in-person voter fraud in states that have loose non-photo ID laws

–A Democratic nominee for Congress had to resign in Maryland last month because she had voted in two states at the same time.

–An Arkansas state legislator resigned from office after pleading guilty along with a city councilman and police officer to committing voter fraud.

–In Iowa, a Canadian couple and a Mexican citizen were charged with illegally voting in U.S. elections.

–The guilty plea in California of a Mexican drug dealer who fraudulently voted in the 2008 election while in this country illegally.

Our chaotic voter registration rolls make it too easy to commit voter fraud. A February study by the non-partisan Pew Center on the States found one in eight voter registrations were invalid or contained major errors. Some 2.8 million people were registered in two or more states, and 1.8 million registered voters are dead. That’s an open invitation to fraud and mischief. The 7th Circuit Court of Appeals, ruling in 2007 in favor of photo ID laws, found there was “an extreme difficulty of apprehending a voter impersonator” if no ID was required. In other words, we have no idea how much fraud could be out there.

We should clean up our voter rolls, require those casting absentee ballots to provide a driver’s license or Social Security number and make photo ID mandatory at the polls. Photo ID will not just stop the voter impersonation liberals claim doesn’t exist, but will cut down on multiple voting, non-citizen voting, people voting in the wrong precinct, out-of-state voting and voting in the names of fictitious people.

Former Democratic Congressman Artur Davis says he stopped opposing photo ID laws because he knows of too many instances of voter fraud in his Alabama district. “The worst kind of voter suppression today is the wholesale manufacture of ballots in African-American neighborhoods,” he told me.

Indeed, a 2012 Rasmussen poll found 64 percent of Americans think voter fraud is “very” or “somewhat” serious. African-Americans (64 percent) and those earning under $20,000 a year (71 percent) agreed.

The Supreme Court has backed that concern. In 2008, it found states have the right to pass photo ID laws in an opinion written by liberal Justice John Paul Stevens. In a unanimous 2006 decision reinstating Arizona’s voter ID law, the court stated: “Voter fraud drives honest citizens out of the democratic process … Voters who fear their legitimate votes will be outweighed by fraudulent ones will feel disenfranchised.”

Former Democratic Senator Chris Dodd of Connecticut put it simply when he co-authored the Help America Vote Act in 2002: “We should make it easy to vote, and hard to cheat. We can do both.” We should get to work to do just that.

John Fund, a National Review columnist is co-author of “Who’s Counting: How Fraudsters and Bureaucrats Put Your Vote At Risk.”