Via the Kurdish media network Rudaw: 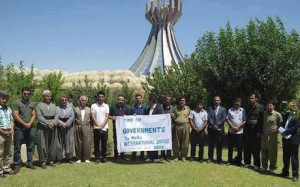 “In order to stop future genocides or stop the repetition of past genocides, the Iraqi government, to reassure the people of Kurdistan, must sign the Rome Statute and become a member of the International Criminal Court,” the statement read.

After decade upon decade of watching the innocent suffer and die in Iraq, this grasping hope is painfully understandable.

Alas, does anyone seriously think the Kurds or any other oppressed minority within Iraq will be “reassured” by the supposed umbrella of protection offered by an institution which after more than a decade and $1 billion dollars has precisely two convictions of obscure African warlords? Are we to believe a wannabe Saddam or ISIS will tremble at the thought of facing an organization the mostly issues self-aggrandizing press releases and lectures the world on why it will not apologize for its failures?

No. The ICC is chasing atrocities not deterring them, as is readily apparent to anyone not already in the tank for the Court.

Of course, the real reason Iraq will not join the ICC has less to do with external realities of the Court than internal political schisms (which, if history is any guide, the ICC would only acerbate):

Luqman Abdul-Qadir, the head of the Halabja Chemical Victims Society, said he believes Iraqi authorities refuse to join the ICC because of sectarian motivations.

“The person who represented Iraq at the time was a Shiite, and they (the Shiites) thought that the Sunnis would gain back power and that is why they tried to become a member of the Rome Statute. But after they realized that they themselves would become the rulers of Iraq they withdrew the application,” Abdul-Qadir said.

Indeed. Perhaps they learned this tack from the Obama Administration?