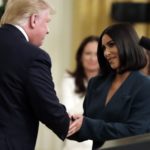 Peer pressure is a powerful tool employed to influence and control the behavior of others. It used to be the case that it was truly only effective amongst children, those not yet strong enough in character and resolve to resist the condemnation of others. In recent times, however, in our culture of political correctness, adults and corporations can regularly be seen caving to the demands of their peers for conformance.

Celebrity and activist Kim Kardashian West faced just such peer pressure last week when she announced her plans to visit the White House and celebrate the “First Step Act” with its key designers President Trump, his daughter Ivanka, and her husband Jared Kushner. Instead of conforming to prevailing Hollywood winds and avoiding the president, Kim, who has made criminal justice equality and prison reform her flag-in-soil issues, made the trip and made strong statements in support of the new program.

It was roughly a year ago that TMZ broke the story that Jay-Z had pressured fellow rapper Meek Mill, an outspoken supporter of criminal justice reform, to cancel a planned visit to Washington to participate in a conference the president had called to discuss the issue. Mill was given a chance to turn words into action and get involved in actually solving a problem. Peer pressure caused him to back away.

In praising the president’s freshly enacted legislation which gives an opportunity to people who have served their time for their criminal infraction, Kardashian committed Hollywood heresy by saying, “It is really such an honor to be here today,” and by calling the president’s new program “magic.”

“Thank you @IvankaTrump for helping me to start this amazing journey of fighting for people who truly deserve a second chance!”

Ivanka and Jared have been the subject of so much Hollywood hatred that you know Kim risked some serious Los Angeles heat by making such a positive public statement.

Courage is considered one of the four Cardinal Virtues of Western Civilization. It, along with wisdom, moderation, and justice, was identified going back to Plato as being essential to the ideal person. Aristotle said that courage was the mean between rashness and cowardice and pointed out that a person cannot live a good life if they went around being afraid all the time.

Politicians, not just celebrities, have been bowing to the fear created by peer pressure. During President Trump’s exploration of the prison reform issue, many Democratic politicians who harped on the need for such reform for years refused to participate because of the president’s involvement. They feared reprisal for standing alongside President Trump.

Where is the bellicose House Speaker Nancy Pelosi in all of this? Why isn’t the lady who has spoken out so often of injustice in the federal prison system not standing right next to the president talking about what is likely going to be the only piece of meaningful legislation passed prior to the 2020 election? She’s hiding. She’s afraid.

There can be no question that Pelosi supports the measure, indeed, she issued a terse, but positive statement back in December when the House passed the bill. But, stand next to the president and work together on Second Step legislation? Not happening.

The Speaker lacks courage. Like so many other politicians, celebrities, and everyday Americans she finds it easier to pander than she does to make a difficult stand, face criticism, and do what is right. She is a follower cast in the role of a leader.

This lack of courage is not some sort of liberal disease to which conservatives find themselves immune. In going to the White House and standing next to the president, Kim showed more courage than many Republicans have over the past three years. From Paul Ryan to Justin Amash, too many Republicans have been unwilling publicly to show support for the president, even though in the privacy of a smoke-filled room while gripping a cognac they whisper that they agree with what he is doing.

Courage hasn’t completely disappeared from the American political landscape. Activist Van Jones was a strong public advocate of the First Step Act despite his political and general lack of agreement with the president. It takes courage and strength to enter discussion and forge agreements with people whom you might otherwise find disagreeable. Cicero knew this 2,000 years ago. Nothing has changed.

Kim Kardashian West shows courage; Nancy Pelosi does not. Adam Levine shows courage playing at the Super Bowl; numerous other performers do not. Until American adult influencers and political leaders learn how to withstand peer pressure, our liberty is at stake. Why can’t adults resist the very thing they all teach their children to resist?

George Landrith, the president of Frontiers of Freedom made the following announcement about its new, major effort — Stop Convicting Soccer Moms:

Over criminalization is a growing problem. Government at every level continues to grow larger and larger and continues to look for new things to regulate, mandate and punish. One example of this crazy over criminalization trend is in Virginia, driving in excess of 80 mph on a freeway with a 70 mph speed limit can make you a criminal and subject you to a year in jail and a criminal fine of $2,500.

Driving on an open freeway, the flow of traffic is typically somewhere between 78 and 85 miles per hour. Let that sink in — driving with the flow of traffic on a freeway can make you a criminal and you can spend up to a year in jail and receive heavy criminal fines of up to $2,500, plus thousands in legal fees. Making criminals of soccer moms for driving a little too fast is an abuse of power. Traffic fines are to be expected, but jail time and criminal fines should be out of bounds for something that virtually everyone does.

Such a law is compelling evidence of a government that no longer serves the public interest, but is instead looking to pad government coffers and advantage trial lawyers. The government should be serving and protecting law-abiding citizens — not finding new and corrupt ways to convict soccer moms of absurd so-called criminal offenses.

Frontiers of Freedom wrote on the injustice of surprising motorists with criminal charges for what most people would think is only a modest speaking ticket and within a few weeks Virginia started posting signs warning of the criminal penalties. While we are glad to get the attention of Virginia politicians, it is outrageous to criminalize simply exceeding the speed limit as virtually every driver even grandmothers and soccer moms. The law needs to be changed. We don’t need more signs warning us of an unjust and corrupt law.

We are shocked that neither Governor McAuliffe nor the state legislature has done anything to reform or fix this abusive law despite it having been raised during legislative sessions for the last several years. We call upon Governor McAuliffe and each and every Delegate and Senator to make it a top priority in the upcoming legislative session to fix this law and treat speeding as a traffic violation, not a crime.

There are other states all across the nation that take a similar approach and criminalize ordinary traffic violations. We ask Americans everywhere to help us stand up against over-criminalization and sign our petition at www.Change.org.

You can download a PDF of the Press Release here. 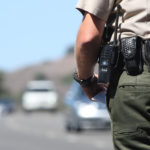 Any honest driver will admit, at least to themselves, that at varying points in long freeway drives, they have driven more than 10 miles per hour over the speed limit — just driving with the natural flow of traffic or by accident. How would you feel about being stopped for driving more than 10 miles per hour over the limit while on a family vacation and not getting a ticket, but instead being hauled off to jail? Does that sound like a reasonable exercise of government power? If we keep criminalizing ordinary and small infractions that virtually every American does, soon every American can spend time in jail. This is an absurd policy. Yet, that’s the direction things are going. END_OF_DOCUMENT_TOKEN_TO_BE_REPLACED