A Critics’ Chorus Grows: Desmond Tutu Vs. the ICC 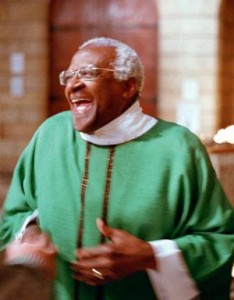 The Desmond and Leah Tutu Legacy Foundation has released a statement regarding the recent kerfuffle between the African National Congress, a South African judge, Sudanese President Omar al-Bashir, and the International Criminal Court.

And while the Tutus are considerably more optimistic about the future potential of the ICC to be a legitimate bulwark against impunity than we are, it nevertheless cogently expands upon — from an African perspective — points we made in this space concerning why the Court is not trusted even amongst those who vehemently oppose al-Bashir:

By refusing to submit to the jurisdiction of the court‚ some of the most powerful nations in the world have created an environment in which no world leaders feel the need to be held to account — least of all those who stand accused by the court of war crimes and crimes against humanity‚ as Sudanese President Omar al-Bashir does.

These powerful nations have created the rationale for the South African government to allow al-Bashir into the country despite the international warrant of arrest hanging over his head‚ and then to allow him to travel home despite a South African High Court order to the contrary.

What that says about South Africa’s moral fabric (the same government has thrice refused to allow His Holiness the Dalai Lama into the country) is a moot point. It is the further eroding of the ICC’s ability to function equitably that will concern lovers of peace across the world.

The parting shots are equally brutal…

The reason the ICC is battling for integrity is because some of the most powerful nations in the world would rather there was no court than one that might one day hold them to account‚ too‚” the foundation stated.

In a moral world‚ Al-Bashir would have the opportunity to defend himself in a court to which all nations should be equally accountable‚ regardless of their power.

Of course, there are plenty of reasons to be skeptical about whether any ICC-like body could ever truly be free of the naked politicization and self-interest of the only world powers great enough to create it.

That said, the Tutu Foundation is right to call out the rank hypocrisy on display here.