Pay No Attention to the Aspiring Transnational Behemoth Behind the Curtain 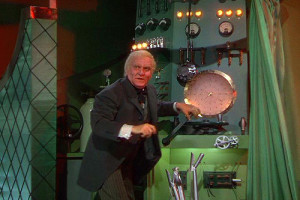 Perhaps you’ve been concerned about the International Criminal Court because of the shamelessly selective enforcement of its purported mission. Or the rent-seeking tendencies hardwired into its DNA. Or its unjust inefficiencies. Or the vast, profound, and seemingly endemic waste of financial resources that could be put to better use by a host of NGOs elsewhere.

Well, University of Arizona professor and Divided Sovereignty: International Institutions and the Limits of State Sovereignty author Carmen Pavel is here to sweep those piddling trepidations away with a single Oxford University blog post in which she accuses Court opponents of attempting to “evoke dark forebodings of a global leviathan.”

Which is apparently ridiculous…

[I]nstitutions such as the ICC and others whose task would be to protect the most basic level of physical security, such as a stronger policing and enforcement agency, are unlikely to turn into a global government, with the power to create zoning laws, welfare reform, or the right to holidays with pay.

Got that? Until the ICC is actively fiddling with your beloved local zoning ordinances, pay no attention to the aspiring transnational behemoth behind the curtain.

Not if those of us living in different countries, with the power to authorize, define and constrain the powers of such institutions, can minimize the dangers of institutional overreach.

If anyone can tell me what that previous sentence means in practical, real world terms, I would be much obliged. It sounds suspiciously like Don’t worry about the ICC misusing its power…because it won’t. (Except that it already does…)

Our knowledge of how to build good institutions is limited, but doing nothing and hoping for the best is no longer acceptable in the face of such challenges.

Pavel’s heart is no doubt in the right place but it seems as if she’s suffering from “politician’s logic”: